That's about all that really need be said.  Reading the original, printed page Michael Crichton novel Jurassic Park from 1990 in the year of our lord 2013 is weird as hell.

Listen, I was hoping to do a whole series of blog posts dissecting the dinosaur-involving parts of the novel and analyzing them in the light of modern paleontological discoveries, but the fact is, I just... can't.  Because the novel moves so fast that it's more worthwhile to give you a guide to weird stuff to pay attention to as you yourself read it, since it still holds up overall.  And more than anything, I noticed two things during this read-through, the first time I'd read the book since my teens:

1) I was surprised by how many of the weird things in the movie came from the book.  And it goes way deeper than the Lysine Contingency or the "They Can't See You If You Don't Move" thing; things that appear briefly in the movie but are much, much better explained in the book.  I mean, like, the most quotable movie lines from Ian Malcolm and John Hammond's obsession with ice cream and, of course, the much-ballyhooed CD-ROM in the tour vehicles

2) You NEED to have a drinking game in play to deal with the book version of Alexis Murphy.  You do.  Because holy, holy, holy sh*t.  Yeah, I'm going to say it.  I'm going to say it and nobody can stop me!  Here I go!  Book!Lex is a better contender for Worst Character Ever than JarJar Binks.  And that obnoxious robot chicken thing from "Quest For Camelot".  And Towelie.  Because all she does though the entire book is whine and cry and complain that she's hungry and play baseball and complain that she's hungry and be bored by the fact that HOLY SH*T SHE IS SURROUNDED BY DINOSAURS OMG!!! and complain that she's hungry.  Seriously, you actually want her to end up violently eviscerated by the end of the book.  Honest to God, the smartest thing Spielberg did was age Lex several years and give her some useful (if instantly dated [Edit: Meaning her self-identifying as a hacker]) skills.  Take a shot whenever Book!Lex whines that she's hungry and two shots when she argues with her brother.  And be careful with these rules.

For reals, here are the weird bits of Michael Crichton's Jurassic Park collected from my Kindle Notes, in rough order:

* - Hey, remember when biotechnology changed everything?  Biotech changing everything instead of the Internet and computers, I mean?  Reminder for the Millennial Kids in the audience: NOBODY saw smart phones coming.  Then again... (I will let somebody else joke about the Monsato cluster-eff...)

* -  August, 1989.  So all of the events of Jurassic Park, which I'd assume was meant to be taking place in the not-to-distant future, are actually happening in the late-80's.

* - Crichton makes a big deal of the "slippery, slimy... foamy" dinosaur saliva, as well as the "rotten stench, a smell of death" associated with dinosaur attacks.  All through the book, there's a very uncomfortable dance between "dinosaurs aren't monsters; they're just another kind of animal" and "OMG ELDRITCH DEMON FROM AN ANCIENT TIME!!!"  It gets awkward as the book goes on.

* - I would like to know if paleontologists really do "measure time in beer".

* - Ah, the Great Dromeosaur Nomenclature F***-Up!  We've actually already covered this here at the Obligatory Art Blog, so let's not even get into it. Even though it affects a huge portion of the novel.  "Six feet long" ugh...

* - Dammit, I want a "Jurassic Park" (the movie) prequel with Hammond's tiny elephant and guys calling Dr. Grant after Midnight to ask what baby dinosaurs would eat.  Also, something involving the tiny pet dinosaurs Biosyn was worried about.  (Let's ignore "Prehysteria".)

* - In that aforementioned prequel, I want a whole plotline where the JP technicians extract DNA, throw it in an egg, and see what hatches.  In, just as a reminder, 1989.  Cause gee wizz, it sure is convenient that they only hatched out popular dinosaurs or, for that matter, known genre.  Imagine if they hatched out something like Pegomastax in 1989?!?

* - So... the park is called "Jurassic Park".  Most of the animals are from the Cretaceous period.  All the eggs are hatched in "Jurassic atmosphere".  Doesn't anyone know what Mesozoic means anymore?

* - Throughout the novel, there's an uncomfortable relationship between "dinosaurs are very definitely reptiles" (to the point where a baby "velociraptor" even has a snakelike tongue) and "wait, no, dinosaurs are the direct ancestors of birds".  Species are described alternatively as big lizards and as giant birds of prey.  This gets weird after a while.

* - Ah, the Version 4.4 conversation.  Briefly paraphrased, the general public doesn't want Real Dinosaurs, they want what they expect dinosaurs to be like thanks to pop culture.  Pop culture like... "Jurassic Park"...

* - Arboreal Hypsilophodons.  I didn't think that was still a thing in the late 80's?

* - The "They can't see you if you don't move" thing comes from the book and, hey, it actually has an explanation!  Fancy that!

* - There's a weird moment where it's said that theropods do not have strong jaws, just strong necks.  Um...?

* - And Lex befriends a young triceratops that she has named, of all things, Ralph.  Huh...

* - "Dragonflies... The Jurassic was a time of huge insects."  Dr. Grant, I think that might have been earlier...?

* - Lots of noise about Tetanuraens being able to swim with their tails like crocodiles...

* - There's also that weird, weird scene where the Tyrannosaurus has a long, flexible, prehensile tongue which she can use to ensnare prey that would, in the late Cretaceous, be too small to bother evolving such an ability for.  Okay.

* - And the (cough) "velociraptors" are able to chew through solid-steel bars.  There is a level beyond Super-Persistant-Predator...

* - Ian Malcolm's whole long "You can't destroy the planet!  Although you very definitely could render it uninhabitable to humans.  But never mind that, because you can't literally destroy the whole planet, so f*** environmentalism!!!" Author Tract.  Ow...

* - Also, a male "velociraptor" bred in the wild is able to change colors based on emotions.  What?!?

* - And Ian Malcolm dies.  I'm only mentioning this because it gets retconned to hell and back in The Lost World.  No, I don't think I want to re-read The Lost World.  Somebody else can tackle that one.

So yes, Jurassic Park is a weird experience reading in the modern era.  Stay tuned next week for another misguided nostalgia binge!

ADDENDUM: Yay!  Metafilter found this post!  This post which is probably the one post on this blog that makes the least sense if you aren't a regular reader!  Wee!  (Dies.  Is dead.)

Art of the Week!  Have a (slightly more) accurate Deinonychus! 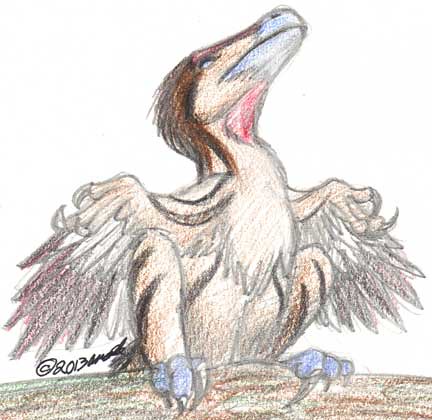 Glad you finally did a "Things in Jurassic Park that are Weird As Hell Today" post.

IIRC, it was cinnamon-flavored. I always thought that sounded good & I still want to try it. As a fellow Bostonian, would you happen to know if any local ice cream parlors have it &, if so, which ones?

"Take a shot whenever Book!Lex whines that she's hungry and two shots when she argues with her brother"

& then we find out ~15 years later that ceratosaurids were even better at it.

So Crichton was OK w/Earth being "uninhabitable to humans"?

"No, I don't think I want to re-read The Lost World. Somebody else can tackle that one."

Maybe I will (although you'd probably do it better).

"Ah, the Version 4.4 conversation. Briefly paraphrased, the general public doesn't want Real Dinosaurs, they want what they expect dinosaurs to be like thanks to pop culture. Pop culture like... "Jurassic Park"..."

Ha, that's right! I never made the connection. Oh the irony...

Colour-changing male raptor: well, the poor guy had no display feathers. Had to impress the ladies somehow. ;P

I quite liked The Lost World, despite the yawning plot-hole between the 'raptors' in both books. One of the huge disappointments of my moviegoing life was the butchery of it for the film sequel. Particularly cutting Doc Thorne out and what they did with Eddie.

Speaking of dragonflies, where the hell DID that giant dragonfly come from, anyway? Did they literally start going back in time or something? Because the dino-resurrection scheme they set up sure doesn't seem like it would work for insects. Also, they were never mentioned amongst the list of species in the park... O_o

I read Jurassic Park when it first came out and spent the entire book waiting for Lex to die. Really, I have never hated a character so much. When the pterosaur bit her I practically cheered! Sigh, if only the T. rex had eaten the little brat.

"In, just as a reminder, 1989. Cause gee wizz, it sure is convenient that they only hatched out popular dinosaurs or, for that matter, known genre. Imagine if they hatched out something like Pegomastax in 1989"

No doubt they would just assume it was a Hetrodontosaurus and remove the feathers and nose bump in later versions so it would comply with everyone's expectations of what that genus looked like in the 1980s.

Actually this is a major point of Fridge Brilliance which I believe has been overlooked. The 'Velociraptors' for example are not Deinonychus because the DNA was found in Mongolia. However in the late 1980s fragments of a giant dromaeosaurid were found in Mongolia but not named or described until the 1990s. The Scientist assumed the animals they had were Velociraptor but it was not, thus their dismay at the large size and ferocity of the animals. I actually bloged about this here...

"Yeah, I'm going to say it. I'm going to say it and nobody can stop me! Here I go! Book!Lex is a better contender for Worst Character Ever than JarJar Binks. And that obnoxious robot chicken thing from "Quest For Camelot". And Towelie."

If there was such an award, I'd nominate both Speckles the Tarbosaurus (assuming 100s of other dino-fans hadn't done so already) & Carlos from The Magic School Bus TV series. I've never hated an animated protagonist more than I hated the latter, but that's a discussion for another day.