(Click for big.) Wow, nature. Now you're just showing off.

It's occurred to me that late October has been an incredibly busy time of year for me, so I can't guarantee you'll be seeing any Halloween content here (I suggest X-Entertainment if you need a fix). I can make a tentative promise however: Christmas content, I will have.

Until then, did anyone else amass an almost-complete collection of Peterson First Guides as a nerdy teen? 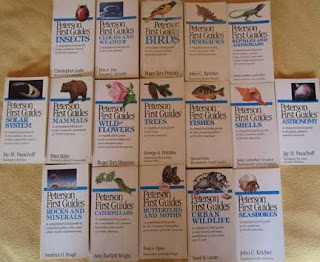 Well, anyway. the Peterson First Guides series was first published in the mid 1980's and as you can see, I managed to collect almost all of them. (A quick look online reveals that I only missed out on Forests. And a fair number of the guides I do have are long out of print.) I mentioned them very briefly before and I think I noted that I loved some of them to death. 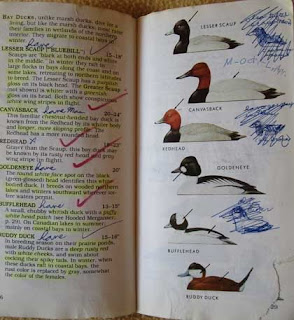 No, I didn't yet carry a Sketchbook with me everywhere. I have no idea what any of those margin notes mean either. This was the first color field guide to birds I owned and nobody told me what to do/what NOT to do with it. 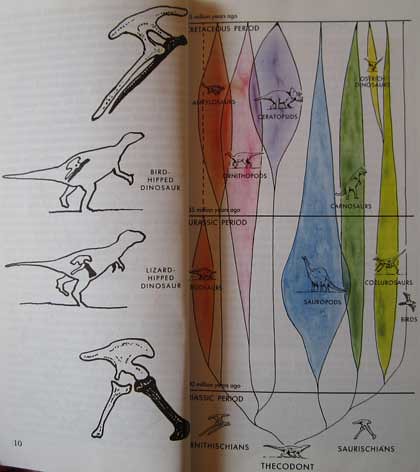 Anyway, the reason why we are here today is because of one of the most unusual titles in the series: Dinosaurs, written by John C. Kricher and illustrated by Gordon Morrison, published by Houghton Mifflin in 1990. This slim volume was once the best book on dinosaurs I owned. Digging it out of the big bookcase today, it turns out to be an unintentional treasure trove of paleoart memes from the era (see the dubious dinosaur family tree above. Why the "Ostrich Dinosaurs" are singled out, I have no idea.) As usual, most of the illustrations look very strange today. However, this book uses Peterson's trademark "look for this in the field" arrows, just like in any other of his Guides, so those paleoart memes are handily pointed out for us.

Funny Aneurysm Moment: In the introduction to this book, Roger Tory Peterson, the king of birdwatching, sadly notes that, "Of course, you are not going to see a dinosaur in the field". Damn, dude, nobody told him? 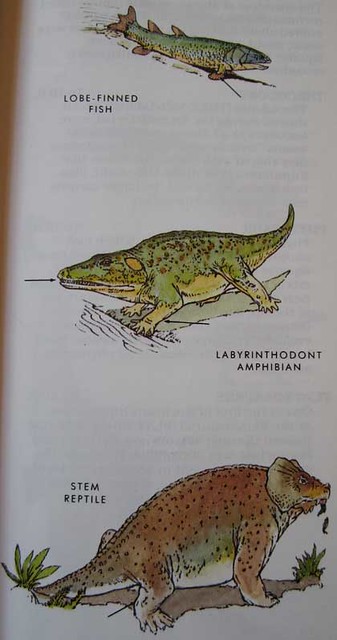 Most Peterson First Guides were illustrated with beautiful, almost photo-realistic paintings. Here, as you can see above, the illustrations look comparatively cheap. They also tend to be small and rather smudgy. It feels as though the illustrator thought the idea of a field guide to extinct species was silly and tried to get the assignment overwith as soon as possible. 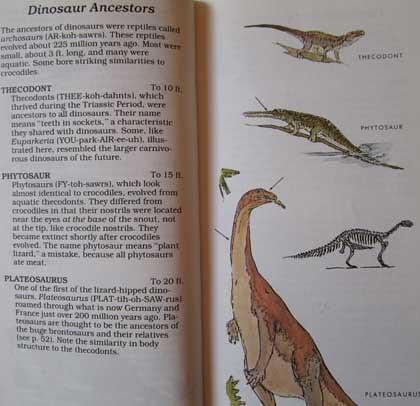 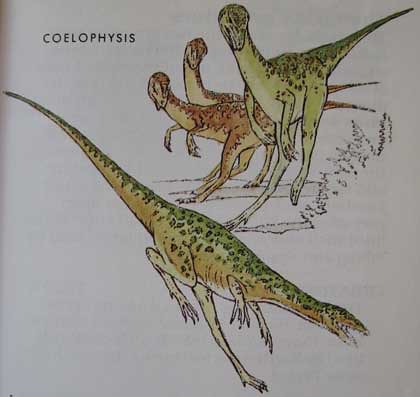 A whole pack of strange Coelophysises-sess-esssssththth-(raspberry)... (Sorry.) Is it me or do all the background Coelos have the exact same face?

I love this page so much. So we've got a big, burly Ceratosaurus with just one rhino-style horn and a *really* short tail, a big, burly Dilophosaurus, and the only thing distinguishing Allosaurus is the fact that he's got three fingers. And, of course, bunny-hands for everyone! 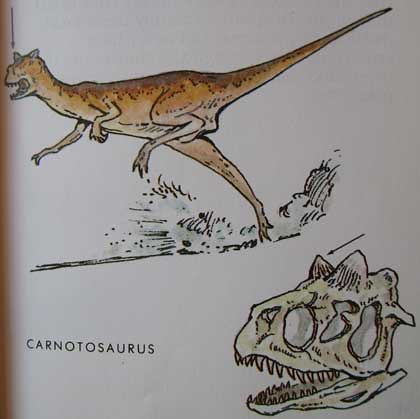 In the 1990's, the world learned of the tragedy of eating disorders and obsessive body modification in young Carnotaurii. 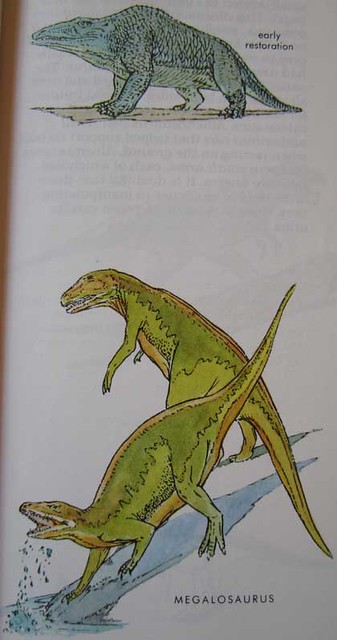 The paleoart memes here are subtle, but they show up a couple of times in the book as we shall see. Megalosaurus and Iguanodon are the only animals for whom the original reconstruction is shown. More interestingly, one of the Megs here is shown drinking from a pond. Anyone else reminded of the river raft scene in Jurassic Park?

Incidentally, Jurassic Park had it's first publication in 1990 and haunts this book like crazy. More on that in a bit. 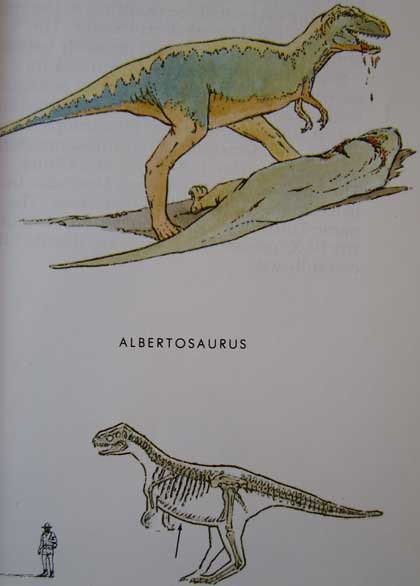 I rather like the color scheme on this Albertosaurus, but I really love the dopy skeletal study. The Scale Guy standing next to it is totally thinking, "whut?" 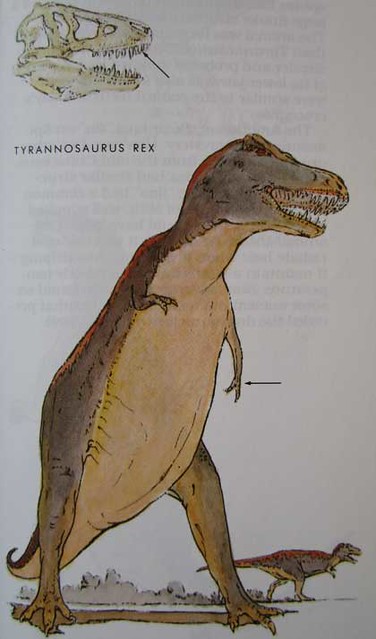 Hey, did somebody order an 80's Spinosaurus who has just thrown his spine out? 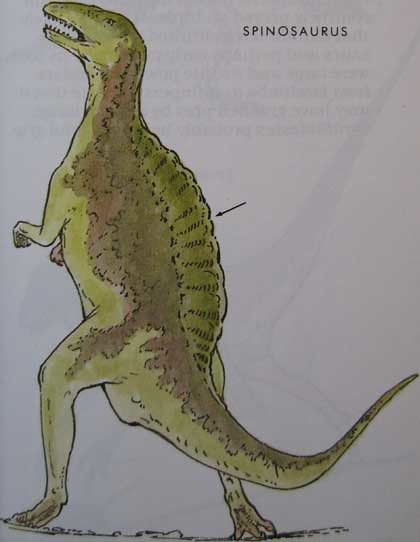 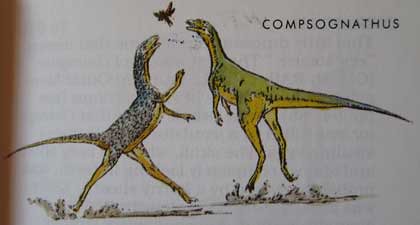 An Oviraptor-Skeksis sharing a page with a somewhat awkward-looking Troodon, which naturally brings us to... 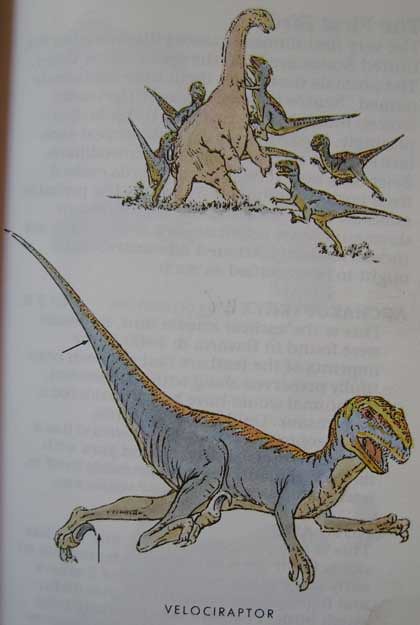 Oh, where to begin?

Okay, first off: the Great Dromeosaur Nomenclature Mess-Up of the late-80's-early-90's. Most of you already know about this, but the story's worth repeating, as it has caused more than it's fair share of headaches. Here's what I know:

In the good ol' Harvard Museum of Natural History, there is a very old mount of a maniraptor about the same size as the Jurassic Park (book and film) raptors, and it is labeled "Deinonychus". Now it turns out that the mount has a few significant things wrong with it: it has the wrong head mounted on it and the hands are in the "kangaroo/bunny hand" position instead of the correct "killer buffalo wings" position. Nonetheless, this is what most people imagine when they hear "Deinonychus".

In Predatory Dinosaurs of the World, Gregory S. Paul suggested consolidating several genre of closely-related theropods into one genre. In other words, all the very similar looking "Ostrich mimics" like Gallimimus, Struthiomimus, ect. are listed instead as Ornithomimus sp. And almost all then-known dromeosaurs (aside from Dromeosaurus itself) went under the Velociraptor sp. umbrella, probably because it's just the cooler name (or was named first, whatever). Deinonychus is called Velociraptor antirrhopus in the book.

Still with me? Good, cause this is more involved then I expected. Michael Crichton uses Paul's book when researching Jurassic Park and carries the Velociraptor antirrhopus thing along with him. He also makes his raptors somewhat bigger, meaner, and a LOT weirder. (Chameleon abilities! They can gnaw through steel bars! Corrosive saliva! They can *swim*! Man, one of these days, I need to do a "Things in Jurassic Park that are Weird As Hell Today" post.)

Naturally, the Velociraptor antirrhopus thing carries over into the film, though it's raptors are even *bigger*. (I still fail to understand why a turkey-sized animal with large talons ripping your lungs out isn't as scary as a pony-sized animal doing the same things.) By a happy coincidence, Utahraptor was discovered around the same time and the crowd went wild.

Point is, that's why this very typical 80's Deinonychus is identified as Velociraptor.

Bonus: A whole pack of 'raptors attacking a comparatively huge... something. (I assume that's supposed to be a Tenontosaurus, but it looks a whole awful lot like a badly-drawn sauropod.) 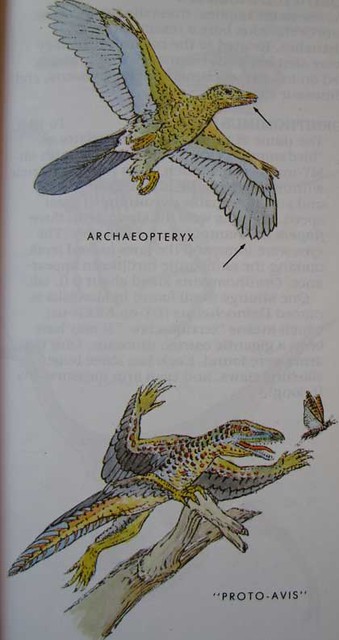 On that note, I think I'm going to pause here because this is running very long. Here we've got a very 80's Archaeopteryx and "Proto-Avis", a "hypothetical animal, one that has not actually been found yet." "Proto-Avis" is what people in the 80's expected a close relative of Archaeopteryx to look like. Note that it looks less like a feathered dinosaur and more like a weird lizard-thing with feathers. Dat tongue...

Next time, childhood trauma, chill Chasmosaurs, and the 80's equivalent of the nautical nonsense that's been making the paleo-blogosphere rounds lately.

Art of the day!

I started in on this: 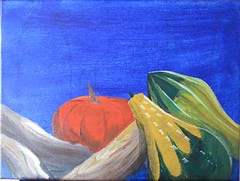 "Here we've got an odd reconstruction of Compsognathus, one of whom is naked and one of whom has feathers, as "some scientists believe" according to the text."

The feathered 1 looks like it's dancing for joy (probably b/c it knows it's the most modern theropod in the book).

"And almost all then-known dromeosaurs (aside from Dromeosaurus itself) went under the Velociraptor sp. umbrella, probably because it's just the cooler name."

Actually, it was b/c Velociraptor was the 1st of that bunch named. IIRC, Paul even said he liked the Deinonychus name better.

Not necessarily. They could be attacking an '80s tenontosaur. Now that I think of it, sauropod-esque tenontosaurs would make a good paleoart meme post: They're in a lot of old kid's dino books (Even some post-2000 ones: http://www.artdinouveau.com/Art_Dinouveau_-_12_Aug/Tenontosaurus.html ) & I still don't know how or why!

"On that note, I think I'm going to pause here because this is running very long."

The longer the better.

Also, who is the illustrator of those waterfowl? I have an old and beloved field guide not belonging to this series which has markedly similar looking illustrations.

P.S. Get this: my verification word for posting this comment is 'ingen'. Well, I never.

^ I believe the illustrator is none other than Roger Tory Peterson himself, Niroot.

(And indeed, all hail Dilophosaurus-Lord!)

I've just checked my book, A Field Guide to the Birds of Britain and Europe (first published 1954, with my edition being from 1963), and the illustrator is indeed Peterson. :D

This has to be one of my favorite posts yet!

I did not have the Peterson field guides, but I did have others (along with some non-field-guide books) that I marked up like that as well.

I actually have a Dinosaur Field Guide coloring book with these exact same illustrations copyright 1989.

One interesting thing about the Jurassic park 'raptors' that I have never seen anyone point out is that the doc in JP thinks the dromaeosaurs in the park are velociraptor mongoliensis because the DNA came from Mongolia. Paul mentions fragmentary dromaeosaur fossils from Mongolia that are almost as large as Deinonychus. Michael Crichton was thinking of this fossil when he made his super-sized raptors. The point was that the scientist had not done the proper research just as they messed up with the sick stegosaurs (not triceratops as in the movie) and sauropod poop problem.

By the way Paul's gianr raptor is known today as Achillobator giganticus.

Unfortunatly the movie's showing of a Deinonychus fossil has caused people to think the book got them confused. Nope only the movie :)...

...and please do the "Things in Jurassic Park that are Weird As Hell Today" post!

Just noticed the bizarre floating hat beside the Oviraptor, by the way. Perhaps this was one size comparison figure who wasn't so lucky (though it must have been a really, really tiny person or standing far in the background to be that small).

"Man, one of these days, I need to do a "Things in Jurassic Park that are Weird As Hell Today" post.)"