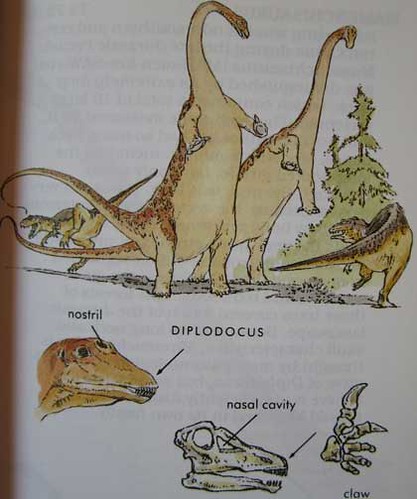 Continuing our journey through Peterson First Guide: Dinosaurs, written by John C. Kricher and illustrated by Gordon Morrison, published by Houghton Mifflin in 1990. As I mentioned previously, this slim volume is a treasure trove of paleoart memes from the era, most of which look very strange today and which are handily pointed out by Peterson's trademark "look for this in the field" arrows.

The little drawing on this page point out the distinctive "Field Marks" of large sauropods, circa 1990: one big claw on the elephantine forefoot, high nostrils, and an overall shrink-wrapped face. Ayuh. Far, far more interesting, however, is the big main illustration. It's basically the AMNH Barosaurus with a few dramatic additions to make it more awesome.

By the way, I cannot for the life of me find any information as to when the AMNH Barosaurus display was unveiled and it's not for lack of trying. I'd have loved to find an article recounting some of the uproar over it's unveiling; it's the "Les Demoiselles d'Avignon" of dinosaur mounts.

We'll see another illustration based off an exhibit that caused an uproar later... 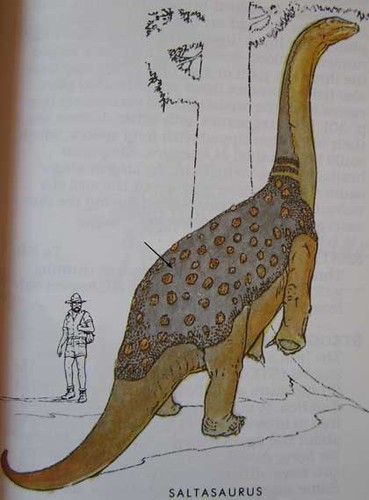 Ah, Saltasaurus. At the time, this guy was the weirdest sauropod we knew about, so he got showcased in dinosaur books an awful lot. His "niche" has essentially been overtaken by the admittedly more fun for artists to play with Amargasaurus. 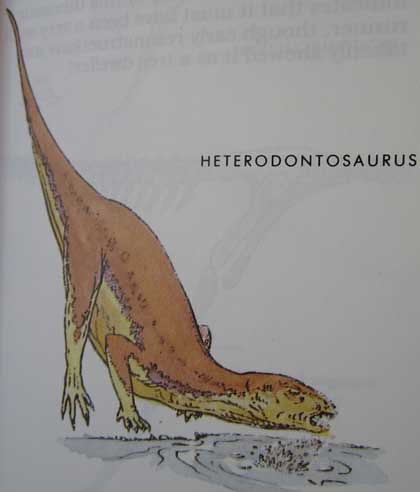 More of the dinosaurs drinking from streams mini-meme! I repeat: Tianyulong would have blown peoples' minds back then. 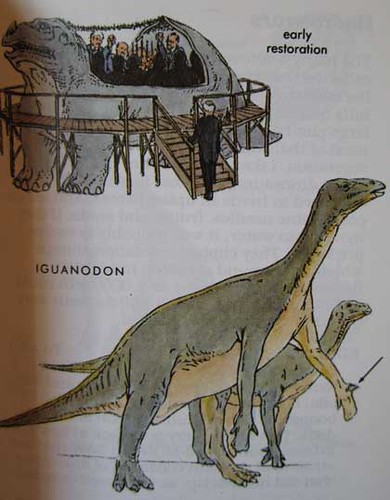 The Iguanodon is known for having a hilariously wrong initial reconstruction that hosted what was undoubtedly an amazing party and for having permanent Hitch-hiker Thumb. That's it. 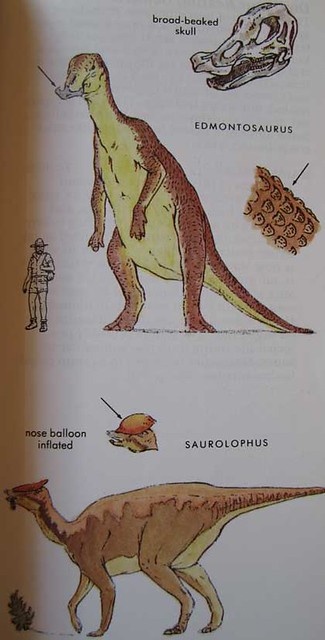 Man-in-suit Edmontosaurus (and the almost prescient use of Edmontosaurus to represent every large crestless hadrosaur save one lucky lady we'll see very soon) notwithstanding, I love the illustration of Saurolophus' Amazing Inflatable Face, here stated like it's an indisputable given. Have I ever shared my favorite-ever take on this paleoart meme? 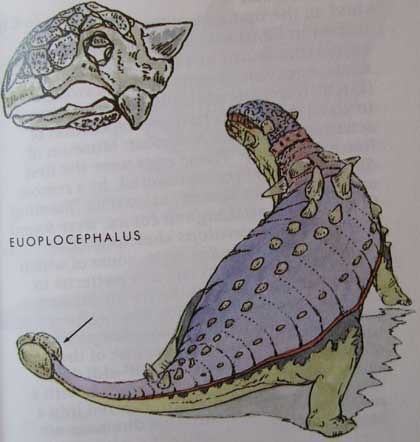 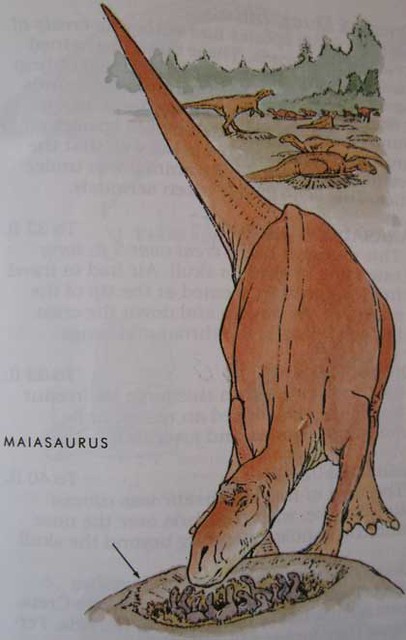 So the only thing differentiating Maiasaura from other hadrosaurs is that she will always always always be shown attending her nest. Note her weird "sad moose" face and that bumpy crest thing between her eyes. 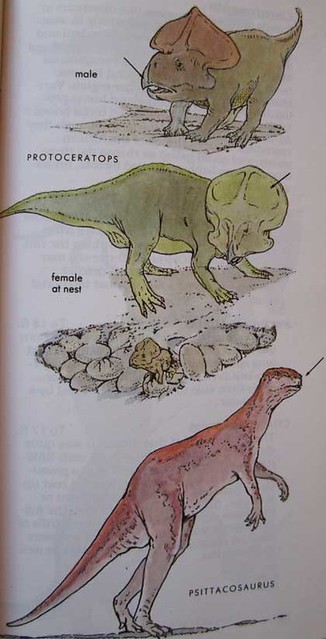 Time for my favorite-ever illustration in the book: 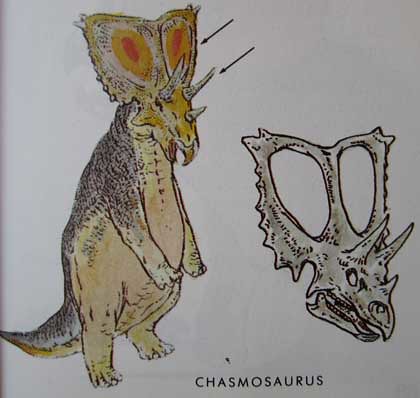 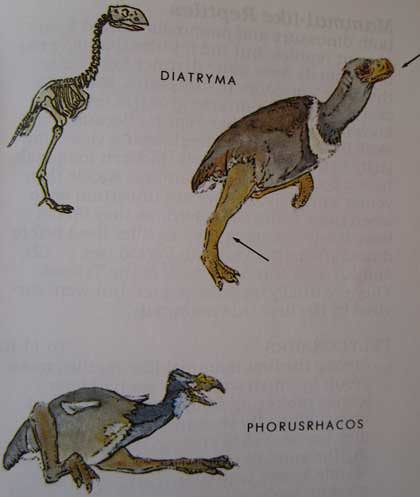 There's no real acknowledgement that birds are dinosaurs here. So these Terror Birds are kind of stuck in as an afterthought. Their illustrations are *tiny* (easily covered with an American Quarter) and I don't even know what Phorusrhacos is supposed to be doing.

Heading to a different group of Avemetatarsalians. The illustrator here seems to have been given a small note card describing these three pterosaurs. I love that Mohawk-thing on Quetzalcoatlus. I also seriously like how Pterodaustro here acts more like a Skimmer than a Flamingo, as usually depicted. 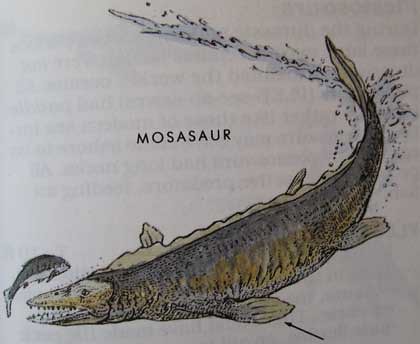 Illustrations of Mososaurs were stuck in a kind of time warp for so many years. Most of them looked less like a big ocean-dwelling lizard than a weird dragon-thing with a snazzy back-fin. And speaking of dragony things... 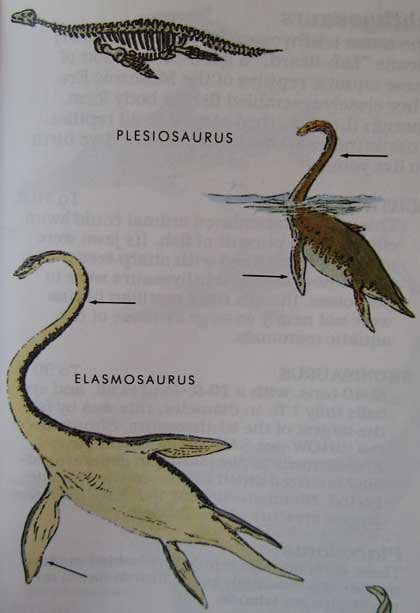 Swan-necked plesiosaurs! It's truly amazing how long this meme has stuck around, isn't it?

I include this illustration of Tuatara for two reasons. First, he is included in the book as a "Living Fossil". (Aren't we technically *all* Living Fossils? And if your physical form hasn't changed in many many millions of years, shouldn't that mean you WIN at natural selection?) Second, I wish I could find it again, but more than one of my childhood books touted this poor unsuspecting creature as "A real living dinosaur!"

Oh, the playground grief that caused me.

Bully: "Why do you care about dinosaurs anyway? They're all DEAD! Who gives a crap?"

Trish as a Lass: "But they're NAAAAWWWWT!!! There's this one little cute thing that nobody's ever heard of that lives in New Zealand and and and..."

Lucky kids today, all you have to do is point up.

And while we are on the subject of Things That Make Me Drink, here's the very last page of the book. Brace yourselves. 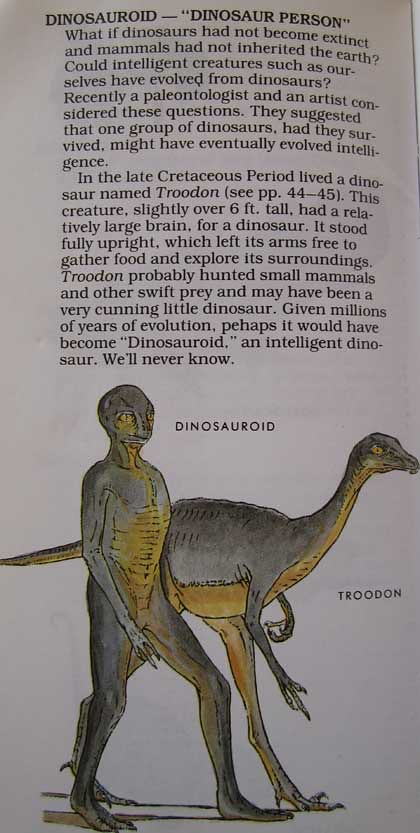 So... another otherwise serious and straightforward dinosaur field guide (see also this) has a nice long entry on the 80's equivalent of the Artistic Triassic Kraken (especially in that it's initial unveiling caused an uproar, the media went nuts with it, and many paleontologists had to emphasize that this kind of thing is not what most of them do with their time). What a note to end on, right?

My reaction when seeing this page in the guide for the first time was essentially,

My struggle to capture the colors of autumn on canvas. 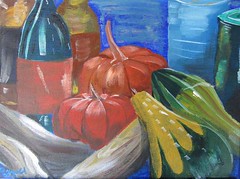 Bipedal Dimorphodon meme as well. And it calls Maiasaura "Maiasaurus" for some reason.

This (and the exchange before it) made my day: "Lucky kids today, all you have to do is point up."

The switch to Euoplocephalus may have been because there are many more specimens known for this genus than for Ankylosaurus, including the nearly complete BMNH specimen (previously "Scolosaurus") with in situ armour. Ankylosaurus much more poorly known, and the skeletal reconstructions before 2004 are pretty dodgy (although reasonable based on the available evidence at the time). It wasn't until 2004 that Ken Carpenter reviewed Ankylosaurus and provided a much more accurate skeletal and life restoration.

"By the way, I cannot for the life of me find any information as to when the AMNH Barosaurus display was unveiled and it's not for lack of trying."

"Man-in-suit Edmontosaurus (and the almost prescient use of Edmontosaurus to represent every large crestless hadrosaur save one lucky lady we'll see very soon) notwithstanding, I love the illustration of Saurolophus' Amazing Inflatable Face, here stated like it's an indisputable given. Have I ever shared my favorite-ever take on this paleoart meme?"

Are you familiar w/Rey's Muttaburrasaurus ( http://www.wikidino.com/?attachment_id=3513 )? I ask b/c that's what I think of now whenever you mention said meme.

^^ Thanks, guys! Comments like these are why I do what I do.

According to the documentary "The Dinosaurs!", the AMNH Barosaurus was unveiled in December 1991.

I love these "outdated paleoart" posts so much.

^^ Thanks a lot, Grant! That gives me a lead next time I'm in the library magazine archives.