Let's Watch "The Dinosaurs: Flesh on the Bone"!

I know I've said this before but YouTube is here to make us happy. Except for the comments, but never mind them now. Here is one episode of what is, all things considered, my all-time favorite dinosaur documentary:

You'll have to trust my foggy memory because there is almost no information about this documentary online, to the point where neither Wikipedia nor IMDB appear to have heard of it (to be fair, the title makes the series hard to search for). There were four episodes of the PBS documentary mini-series "The Dinosaurs" and this is the only one intact on YouTube. By a happy coincidence, it's the one I remember most fondly.

Let us first of all talk about the animation in this show. It's unfortunate that one could make a very valid argument that animation ate dinosaur documentaries. They tend to focus on CGI dinosaurs of wildly varying quality mostly doing the same damn things we've been seeing CGI dinosaurs do since about 1993. But here, everything is hand-drawn, which makes a big difference. HUGE, really. I don't just mean aesthetically either (and, reminder, I do not hate CGI). You see, we meet the animators at one point in the show, and now that we know everything was drawn by hand by what appears to be only two guys makes you appreciate it more. Hell, I have a hard time drawing a stegosaurus with accurate... thingies... even once. I can't imagine doing twelve drawings per second's worth!

Better yet, the animated dinosaur action is supervised by none other than Dr. Robert T. Bakker.  And so in the early 90's, when this documentary premiered, we got to see animated dinosaurs doing things we *really* usually didn't get to see them do.  That migration sequence blew my mind as a teen and I still love the sequence with the mother tyrannosaurus. Many of the animated sequences appear to be directly inspired by the drawings in The Dinosaur Heresies.

Aside from the beautiful animation, here's another thing that's really worth pointing out: this is a documentary about dinosaurs and the focus is on the actual science of paleontology.  They manage to make it look fascinating without resorting to cheap sensationalistic tricks.  On top of that, they're focused on paleontologists who were studying the incredibly exciting and sexy subject of... dinosaur metabolism.  Woo.  Party.  (And it is very amusing to watch it twenty years after the fact.  LOL, "Gigantothermy".  Is that even still a thing?) On top of THAT, they follow a group of scientists as they perform an experiment to test a theory and the results they get are basically the exact opposite of what they were hoping for. Yet they aren't upset, because at least they still learned something. It's all incredible, and I cannot imagine a modern-day dinosaur documentary giving over so much time to actual science like this one does.

There are a lot of terrific things to see in "The Dinosaurs" that I haven't mentioned and wouldn't dare give away.  I hope the other three episodes eventually pop up on YouTube but I'm honestly just happy to have this one.

Sketch of the Day! Drew these while watching "Nature: Cracking the Koala Code", speaking of documentaries that actually show scientists doing science. 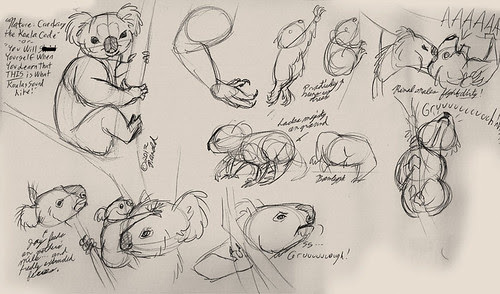 "That migration sequence blew my mind as a teen"

That's actually my favorite part too. However, I didn't enjoy the series overall as much as you did. Yeah, I liked the combo of animated dino action (especially the music that went w/it) & scientists doing science, but I disliked the combo of slow pacing & bored-sounding narrator.

"and I cannot imagine a modern-day dinosaur documentary giving over so much time to actual science like this one does."

To be fair, there's "Big Al Uncovered", both episodes of "The Truth About Killer Dinosaurs" (Yeah, some of the science wasn't as good as implied, but you know what I mean), & the "Terror Raptor" episode of "Prehistoric Predators" ( http://www.56.com/u87/v_Njg1Mzc5MDg.html ) off the top of my head.

I love "The Dinosaurs"! I've actually got the other three episodes on my computer, but it's all four in one absolutely enormous video file, so I have no idea how to share it with anyone.

^ Sadly, I don't know anything about video files myself, but perhaps you could ask someone at YouTube what to do; how to edit them down into multiple episodes. It'd be worth it. Good luck!

It does actually have a wikipedia page:

Frustratingly, all four episodes *were* on Google Video, but after this service went offline they disappeared into the aether. Ostensibly all videos which had been on that service were to be uploaded automatically onto Youtube, but the copyrighted nature of this series suggests this will not happen in this case :(

I had three of the four on videotape when I was little. The animated sequences, I think, were the biggest influence on my love of dinosaurs.