We Are Finally Finished With _The Humongous Book of Dinosaurs_! Forever... 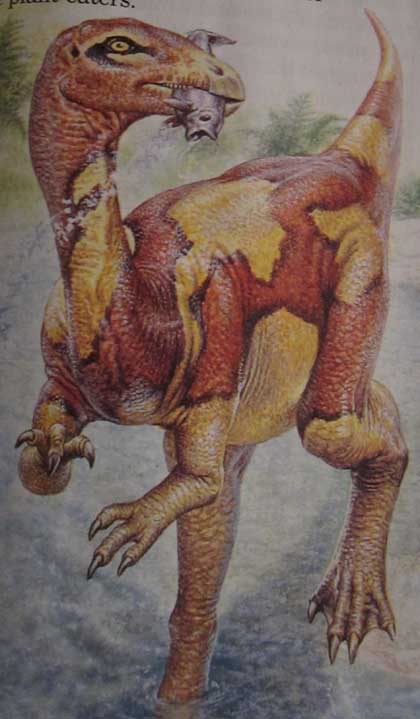 The Humongous Book of Dinosaurs gives us the rare and beautiful "WTF even IS this thing" Fish-eating swimmer therizinosaur (Segnosaurus, to be more precise). Love those psychedelic colors! 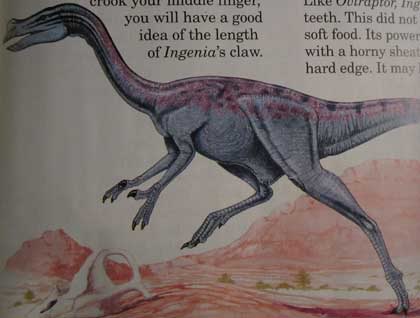 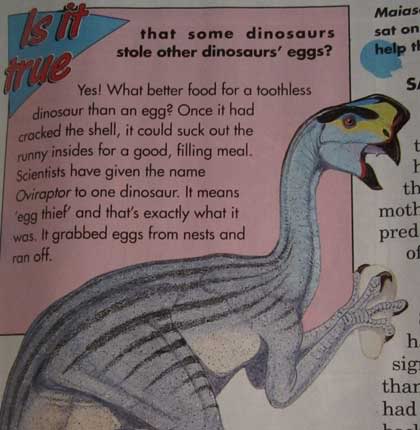 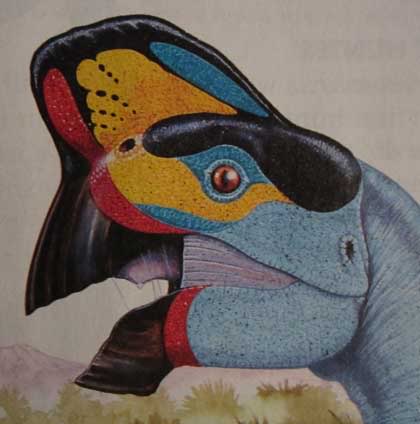 In the early 90's there was absolutely no question that the Oviraptors were gutless egg-thieves and baby eaters. There's even a comic depicting the assumed story behind the crushed-skull specimen of Oviraptor found on a nest. (Turns out that was her own nest, go figure.)

Anyway, we've got an odd-looking Ingenia and a couple of Citipati who manage to be Sparkleraptors without a single plume. Heck, the one in the middle could be in a Patrick Nagel painting. All things considered, Oviraptors fair a teeny little bit better than most of the other maniraptors in this book. 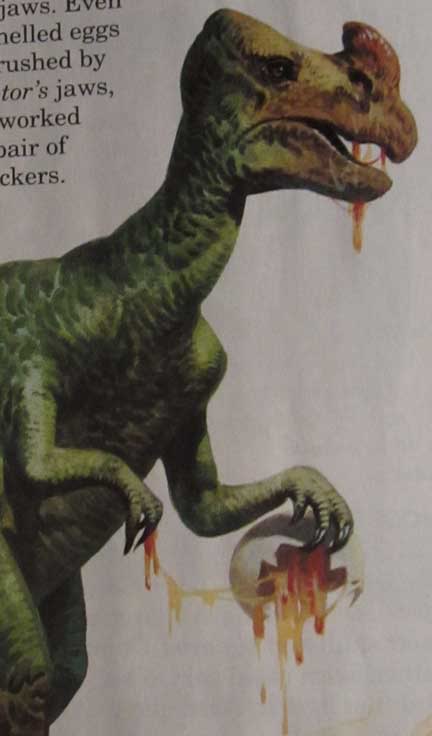 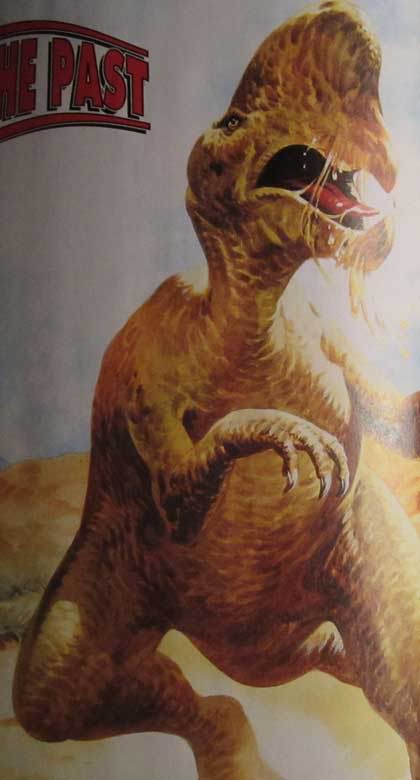 I've got more than just maniraptors to cover, though. Been saving a few images for last. First, what was all that about an old friend? 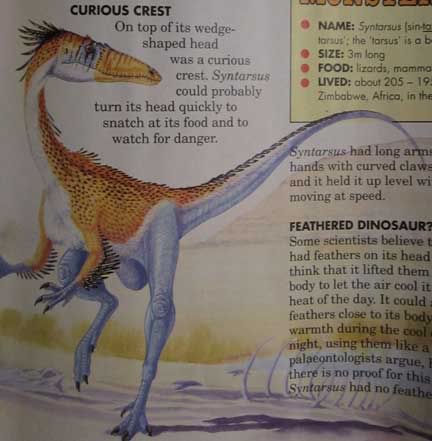 Holy hadrosaurs, it's our old Major Award winning buddy, Syntarsus! Love that hardly-elaborated on "curious crest" bit in the text. 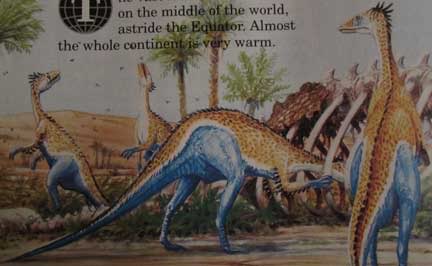 The weirdest thing about Syntarsus and his Mohawk here is the fact that he's the only animal I saw in the HBoD who is totally consistent. As usual, he's the only theropod aside from Archaeopteryx (and remember birds is birds here) who gets to have feathers...

At least until this strange portion very near the end of the book: 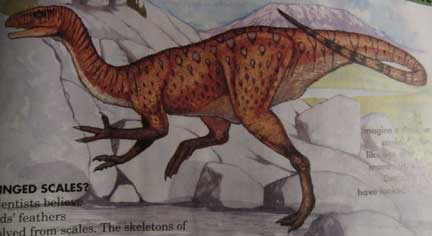 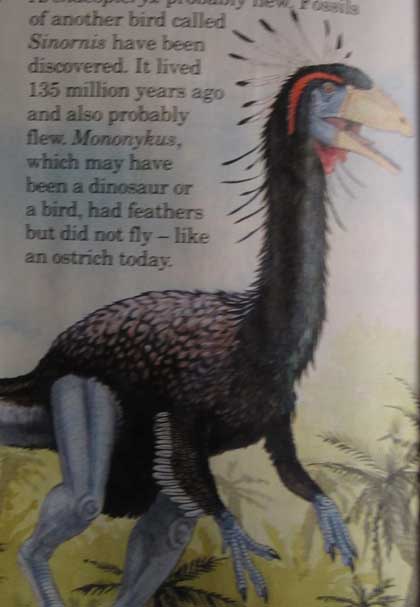 The discovery of Sinornis and Mononychus put a gigantic spanner in the Birds is Birds mentality for those who were still 100% subscribing to it in the mid-1990's. The poor HBoD doesn't seem to know what to do, giving us exactly two feathered generic-looking little theropods and stressing that Mononychus "may have been a dinosaur or a bird", whatever that means. 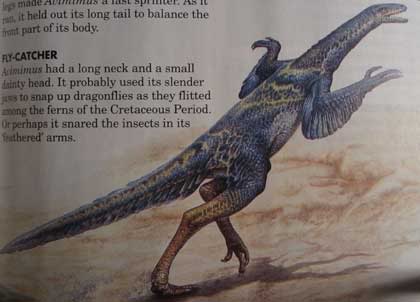 And then there's Avimimus, which was very poorly understood at the time and is here shown as some kind of anachronistic predecessor to Archaeopteryx. With a lizard face and little stubby hands.

I've saved a very special pair of strange images for last. They concern a small bipedal ornithschian. They're pretty much a culmination of everything crazy in all the illustrations we've seen on this long, long adventure. 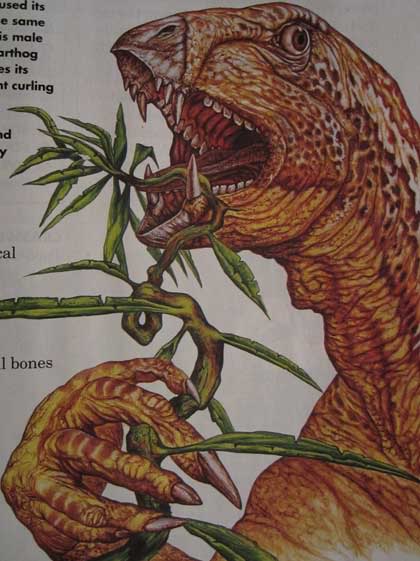 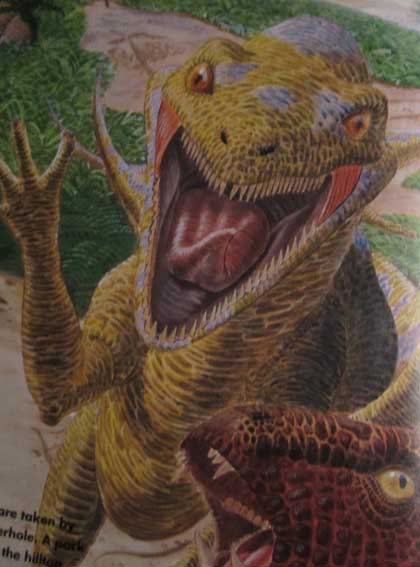 That fanglorious little bastard with the horrifying old lady hands is meant to be Heterodontosaurus. Clearly, this isn't the cute little fang-having fluffy runner we are familiar with now. And good lord, that snake-faced Coelophysis!

Ah, crap, what do I write about now?)

Before I decide on that, here's the finale to "Living With Dinosaurs"! What do you think? Will Dominic accept his father? Will we find out if the baby was born okay? Will Dog (seriously) reunite with his family? Will they explain, come to mention it, what was going on in that cave? Will Dom's cousin and uncle stop being total dicks? Will we ever learn why Dom hates all fish?!?

And the answers for those various questions (though to avoid spoilers, I will not specify which ones) are, "Eh... kind of," and "Fffft-hahaha! No."

Fun fact: the only time this film aired on American television was during that brief, strange period when Jim Henson productions were shown on Nick Jr. Oh what fun that must have been for the kiddies.

Sketch of the Day! Hey, I've hit the final page of this Sketchbook! 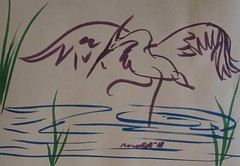 
Now for a few comments:

That psychedelic segnosaur and weird Avimimus are both Sibbick's. They were both part of a larger illustration in a 1989 Dave Norman book that also featured a Segisaurus.

That third oviraptorosaur almsot looks like a Dave Peters illustration.

"I've saved a very special pair of strange images for last. They concern a small ornithopod rather than a maniraptor."

I may add that heterodontosaurs are, by definition, no longer ornithopods. (Also, I don't even want to THINK about that first one...) Somehow, I think I've seen that snake-faced coelophysoid somewhere before...

O_O at the Nightmare Fuel dinos.

I certainly remember seeing similar images of Avimimus from other contemporary sources. Also notice that Mononykus hasn't been recognized as an alvarezsaurid yet and doesn't have the distinctive arms.

And yes, Segnosaurus was thought to have been a fish eater at one point.

"Anyway, we've got an odd-looking Ingenia and a couple of Citipati who manage to be Sparkleraptors without a single plume. Heck, the one in the middle could be in a Patrick Nagel painting. All things considered, Oviraptors fair a teeny little bit better than most of the other maniraptors in this book."

I usually see that analogy made w/bats, but your version works just as well.

"I've saved a very special pair of strange images for last. They concern a small ornithopod rather than a maniraptor. They're pretty much a culmination of everything crazy in all the illustrations we've seen on this long, long adventure."

It's quite coincidental that this series ends w/those images b/c they're from the last issue I received b-4 my mom cancelled my subscription.

I'm fairly sure I recall a fish eating Segnosaur depicted in a coloring book I used to have as a kid called "Dinosaurs of Prey". My dad bought it for me at the little gift nook they had set up at one of those traveling Dinamation International animatronic dinosaur exhibits.
Here it is on Amazon.

I like the very well thought out assault that Allosaur is launching on that poor befuddled stegosaur on the cover.

I believe I have seen Segnosaurus illustrated as a fish eater in other works too. Just one of the strange theories to explain the creature's odd morphology, it did gain some traction I guess, at least in children's dinosaur books anyway....

^^ I have that coloring book, too!

Holy crap, that heterodontosaurus is the most awesome looking thing I have ever seen! I want to get one to guard the gold I have stored in my dungeon. If I had a dungeon filled with gold, I mean.

Meanwhile, I may have never even seen segnos presented as anything but fish-eaters.

Though that's most likely due to those horrible dino books I read as a child, which had been all written and illustrated by the same handful of people.

Something cool I just noticed is that Rey's more recent/accurate Citipati has a similar look: http://scienceblogs.com/tetrapodzoology/Rey%20ovi-ther%2024-9-2007.jpg