I Don't Think There is an End To _The Humongous Book of Dinosaurs_!

Also, Austin Translation just left this here. And if it is true, then I cannot freaking wait!!! (Remember: they research their asses off.)

Also also, a lot of nifty tidbits from "Dinosaur Revolution" (am I the first to joke, "but what happened to 'Dinosaur Reloaded'?" Ah? Ah? [there is a long and awkward pause] Nevermind.) have been popping up. This here animatic in particular is a thing of beauty.

Also also also, and more immediately relevant, I need to reiterate that I do not know which artist painted what in the Humongous Book of Dinosaurs (by the way, I cannot tell you how sick I am of typing that out over and over). I am sorry if it appears as though I am totally by accident and not on purpose picking on one person over and over. (TL:DR - John Sibbick is awesome. And now that I can put a name to his paintings, I realize I owe him much of my childhood as a dinosaur geekette.)

Which leads us (finally) into HBoD Maniraptor Week. Today, it's nothing but deinonychosaurs (everybody with large talons). Yup, the HBoD has inadvertently collected some of the strangest 80's 'raptors I've ever seen. With this in mind, we will ignore the fact that they are all running around buck naked. Feathers are an issue for Thursday (though it will end up being a big one). 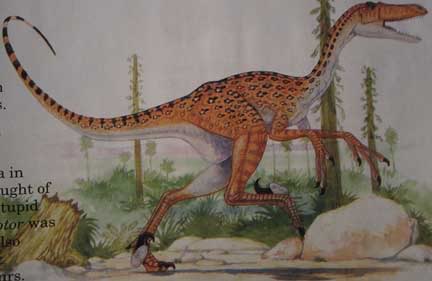 This Velociraptor and Deinonychus look pretty happy to be running around naked (sorry) with a broken tail and broken wrists. Actually, they're not too bad for this time, come to think of it.

The same can't be said for the following: 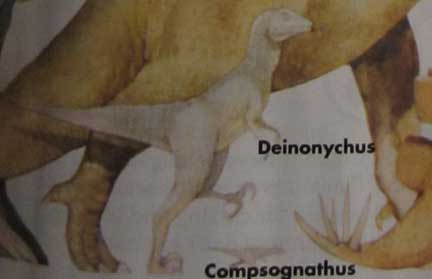 The stiff-tailed kangaroo-hands iguana-faced kick-stepping deinonychosaur was quite common in the 80's. I figure this is all due to cheap illustrators copying each-other copying the famous Bakker image from the 70's.

Bu-bu-bu-but WAIT it gets WORSE!!! 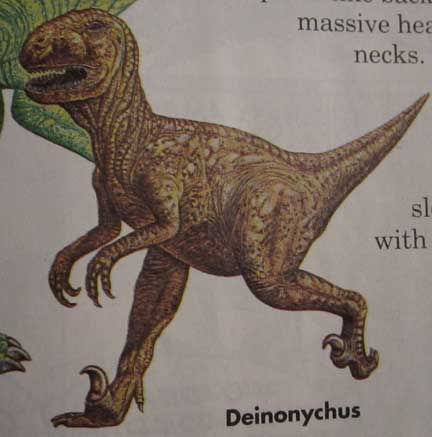 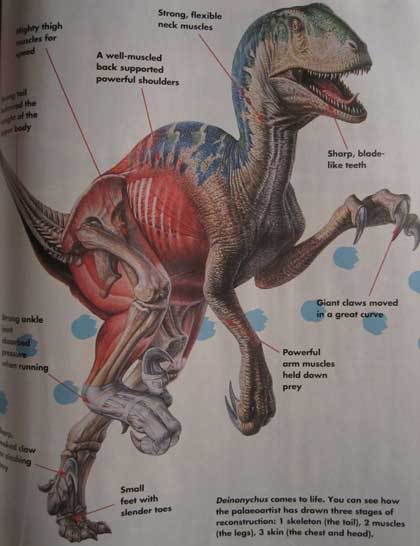 And then there's this strange (though beautifully painted) image, which I know I've seen somewhere before.

If you remember way, way back to the first post, the HBoD tapdances around the issue of Archaeopteryx, because "dinosaurs can't fly". I found, I think, only two decent illustrations in the book of everyone's favorite transitional form, and they are... contradictory... 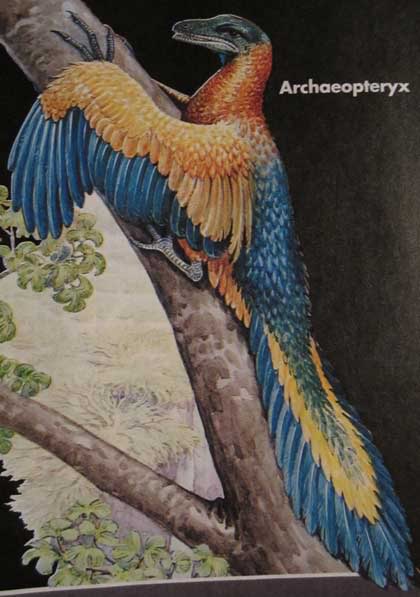 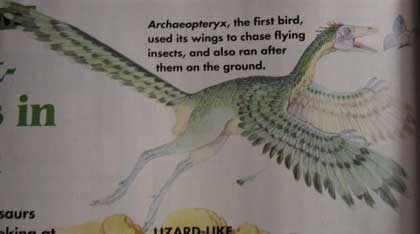 In this corner: reptile halfway finished evolving into a bird who is also a Sparkleraptor (E: and almost certainly the direct inspiration for Archen/Archeops). In this corner: winged maniraptor who gives no guano about you and your "evolutionary levels". You kids fight it out, let's check in on the troodontids. 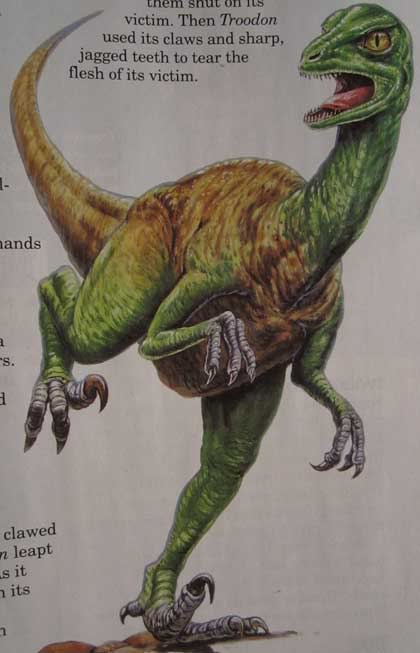 Yikes! On second thought, let's not. 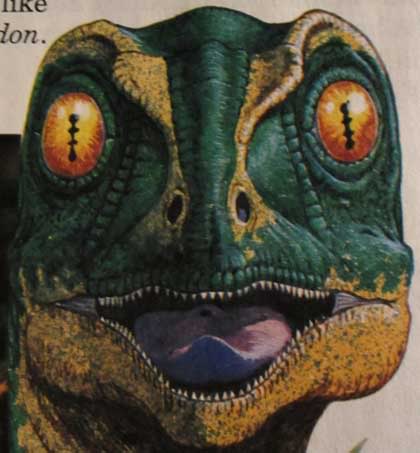 Especially since these are not the eyes of an animal that is stone-cold sober. (Bonus: There just so happens to be a very similar image in our copies of Predatory Dinosaurs of the World.)

Wait, do you guys see the same thing I do? 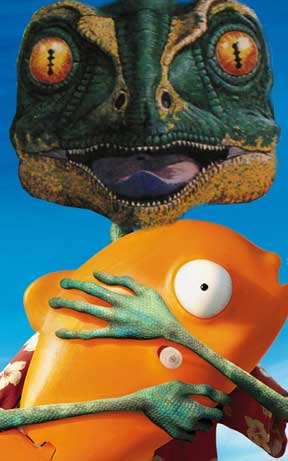 Next up, feathers, eggs, and what's all this about an old friend?

But until then, it's time for part three of "Living With Dinosaurs"! In the words of Nelson Muntz, I can think of at least two things wrong with that title... 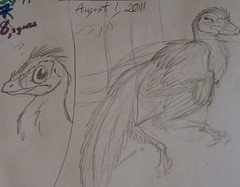 The cutaway maniraptor was used as the cover of Dinosaur! by David Norman. I have a copy of the book, so I could check the artist, but the colouring and texture looks like something by Sibbick who featured a lot in that book.

Scary deinonychosaurs. Speaking of which, cat-eyed troodonts appear to be another (semi-)old paleo art meme.

Something I have noticed in a lot of dinosaur books is that more often then not, the illustrators tend to refrain from drawing theropod faces from a straight on view. And the reason seems to be, as far as I can tell, is that so few of them know how! That nightmare fuel-laden troodon aside, that deinonychus uptop is just plain wonky.

Not quite on topic, but I thought you might find this to be interesting. I recently purchased a copy of "How to Build a Dinosaur" by Jack Horner and James Gormin. (About Horner's Build a Dinosaur project, where he intends to modify a chicken's genetics to reveal previously unused nonavian maniraptoran traits.)

Anywho, the thing about it is that the cover illustration gets the hands on the "chickenosaurus" skeleton wrong! Awkwardly downward pointing kangaroo hands on a maniraptor. It just seems a little astounding, since this is a book by a guy who would absolutely know better.

"I have a copy of the book, so I could check the artist, but the colouring and texture looks like something by Sibbick who featured a lot in that book."

That's b/c it is Sibbick.

"That nightmare fuel-laden troodon aside,"

"Also, Austin Translation just left this here. And if it is true, then... and with a heaping side-order of (Remember: they research their asses off.)"

It may not be the Pixar dino movie I was hoping for (I.e. A dialogue-free "Raptor Red"), but I'm still looking forward to it.

Oh God, I almost forgot about that! I always did think it looked more like a mutant Allosaurus.

"If you remember way, way back to the first post, the HBoD tapdances around the issue of Archaeopteryx, because "dinosaurs can't fly"."

I've been meaning to get back to you about that. The HBoD could've been doing the same as other dino books by referring to non-avian dinos as just dinos for simplicity's sake, hence why it didn't mention Archaeopteryx when saying that dinos can't fly.

"Also also also, and more immediately relevant, I need to reiterate that I do not know which artist painted what in the Humongous Book of Dinosaurs. I am sorry if it appears as though I am totally by accident and not on purpose picking on one person over and over."

The times I've said something weren't meant as accusation, just info. Apols if it came across the wrong way!

On that note: the first two pics, the second archie, and the cat-eyed saurornitholestes (I could never look at that one too long, myself. And chuckles for the Rango ref) are Graham Rosewarne's. One of the better artists in this, but yeah, stuff hasn't aged well. But then, whose has?
I didn't know it at the time, but like you mentioned there's a very strong GSP influence there. The penny dropped - and left a vague sense of disappointment - when I finally flicked through a copy of PDW. 'Til then I thought it was all just Rosewarne's 'genius'. (And I guess Greg's stuff has aged reasonably well. Reasonably...)

You do realize I'm going to have to get this book now, right? I hope you feel guilty for corrupting my teeny little mind...

The Velociraptor and deinonychus by Graham Rosewarne