But before we do that, let us shake our fists at Target. Sweet mother of Robert T. Bakker, you gotta be kidding... 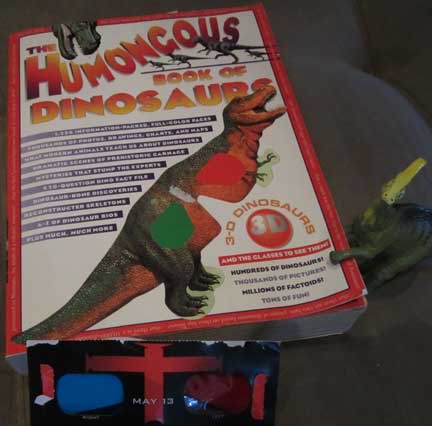 Oh, man, this one's gonna be a doozy.

So back at Boston Comicon I bought The Humongous Book of Dinosaurs (henceforth HBoD) as part of a "any five books on the table you want for ten bucks" deal because a few readers mentioned it and said it'd be fun to review. Well, I don't know if fun is the right word, but I've probably got enough weird images to share from this one book to last the better part of the month.

Seriously. This book is going to take up almost the whole month. Which is actually a good thing, as IRL, I am entertaining some younger relatives. This is adorable but exhausting. Adorablausting.

Adorable, but mildly Exhausting, Side Note: According to my six-year-old girl cousin, nature spirits who sometimes appear as tiny people with insect wings and have a thing for flowers and mushrooms = ridiculous. Aerodynamic giant Arctic cervines with bioluminesent snouts in the service of a fat man living at the top of the planet = perfectly feasible.

As promised in the title, this book is indeed humongous. In the above picture, the Carnegie Collection Parasaurolophus is there for scale. This massive book is as long as my forearm and feels like it weighs several pounds. It clocks in at 1,254 pages and according to the back cover is "more fun than a barrel full of velociraptors!" though I would think most things are.

This edition was tragically missing it's 3D glasses, but they were giving away free red/blue glasses at Bo-Com-Con. Sadly, the book is so huge that I wound up not using them - the sheer size of the book means the 3D images wouldn't focus properly. So, forget I even mentioned them.

The credits for this book read like the phone directory of a small nation-state (there are three pages of illustrators alone, so I apologize for not crediting them all). There's an easy explanation as to why this is so: it's really a big compilation of magazines by Orbis Publishing in England in the early 1990's. You may have already read the two very funny posts (so far) Love in the Time of Chasmosaurs ran about it earlier this spring (I apologize in advance if I end up making fun of some of the same illustrations). In 1997, an American publishing company, Stewart, Tabori & Chang collected every issue of the magazine and mashed them together to make this giant book.

For the same effect, start collecting as many issues as you can of one magazine, then duct-tape them together at the spine. Give the resulting giant book to a friend to read and see how well it "flows" for them. Oh, and have fun writing a list of credits for all the writers, photographers, and illustrators to stick on the back page.

So how do I begin to tackle a book this huge? Part of me wants to go chronological, but another part wants to jump all over the place while focusing on one certain animal or other subject at a time. I think I'll start by tackling the whiplash effect I got looking at all the illustrations from the whole run of the magazine at once. If nothing else, it'll show that I'm not going to make fun of every picture; some of them are, after all, very nice: 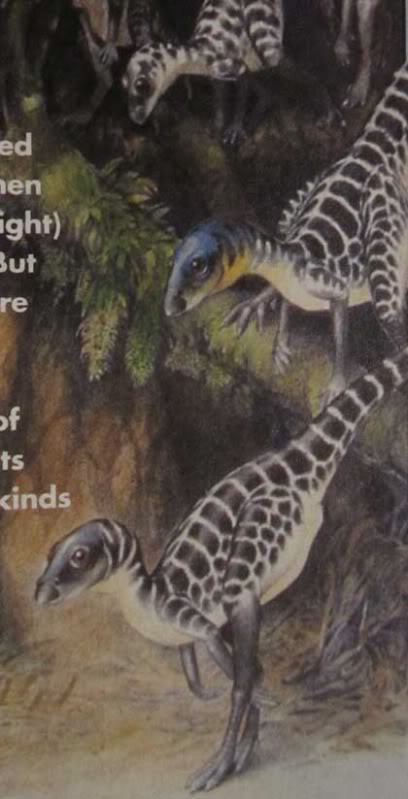 Little Leaellynasaura had just recently been described, so this painting isn't quite accurate to what we know now (tail!!!) Still, I love the character and atmosphere in this piece. It's a very nice painting, and it makes me all the sadder that so much more of the artwork in this book looks more like, well, this: 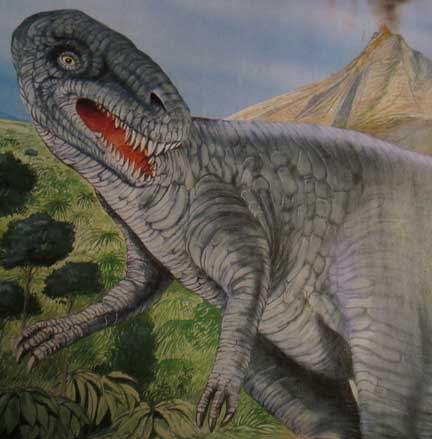 Yep. That's meant to be an Allosaurus. The poor beast gets quite a lousy deal in this book, having the most inconsistent appearance of any animal. Remember that for the longest time, Allosaurus was "just a smaller, earlier T. rex, but with three fingers". Here are a few more Allosaurs throughout the book: 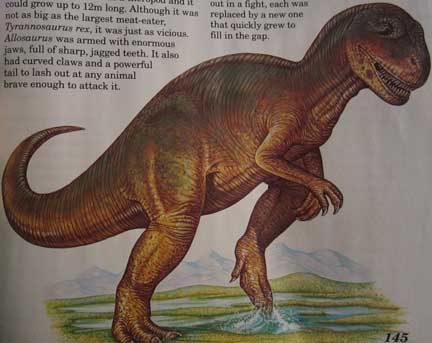 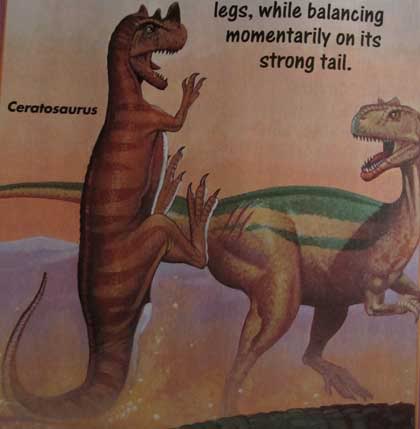 Oh, hey, a shameless rip off a more famous paleo-illustration! One by Gregory S. Paul, no less! Drink!

So about those 3D pictures. Here's the one example I'll give you and keep in mind they are pretty much all like this. Some are photographs of models; others are drawings. All have the annoying red/blue thing going on: 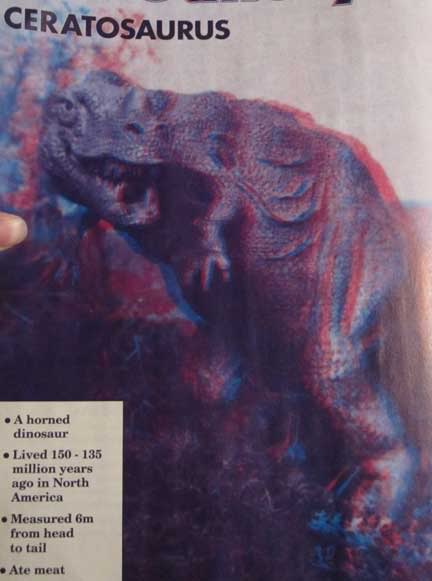 Hmm, I wish I could say this was the first time this month I saw Ceratosaurus identified as a "horned dinosaur". I guess that isn't strictly speaking wrong, but it's very strange. I hear horned dinosaur, I immediately think Triceratops and company.

Before I pause for the next post, let's learn some interesting facts about dinosaurs shall we? First, what do you think the most important dinosaur fossils ever found would be? 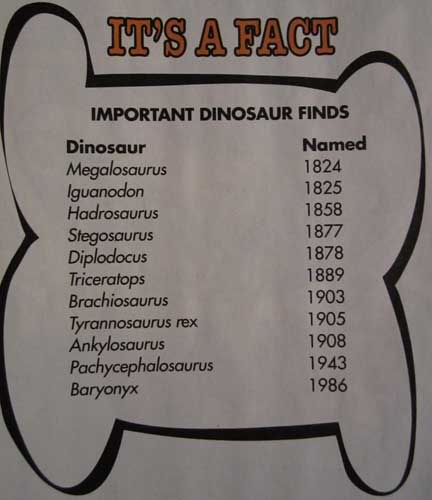 My inner monologue while reading HBoD's list: "Yes, yes, yes, okay, yes, a-ha, okay, yes, ...sure I guess, um..., You know how I can tell this was originally published in England? Where's Deinonychus? What about Protoceratops and her eggs? Or Maisaura for that matter? And where the hell is Archeopteryx?"

Actually, there may be a reason for that last exclusion...

Ignoring the weird Pteronodon for a minute: "Dinosaurs did not fly. Ever. So shut up, you."

Yeah, at the time this book was written, dinosaurs is dinosaurs and birds is birds, and if you think there could be any reason to ever be confused about this point, you are weird and wrong.

The pigeon is totally reading that title (oh my God, that title) and thinking, "Yeah, Dick VanDyke in 'Mary Poppins'*! Ya got a problem with that? Maybe all my Charismatic Megafauna relatives are extinct but I can still crap on your convertible!"

* - The one and only instance in which I have heard anyone say "Coo-er!" unironically.

I love how the text goes way the eff out of it's way to avoid mentioning Archeopteryx. 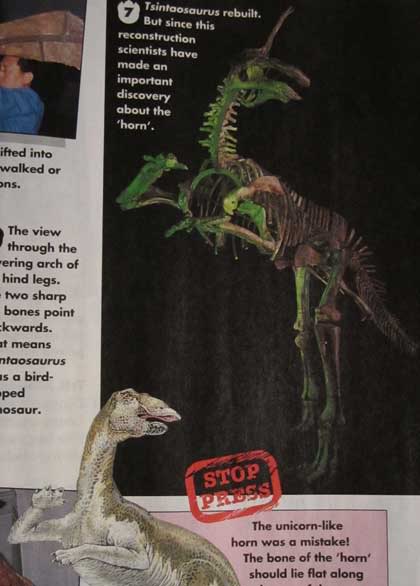 We're going to end today with Tsintaosaurus, everyone's favorite non-mutant goat real live unicorn. Or is it? I've seen the "the horn was really part of it's snout" argument before and I have yet to find a reliable place where it's either confirmed or denied. Anyone know the truth here?

Next time: Dinosaurs face their one common natural enemy!

Sketch of the Day

Here, apropos of nothing, is a study of a Northern Water Snake: 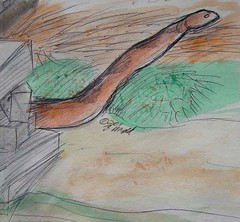 Indeed, it has since been confirmed that Tsintaosaurus did have a unicorn horn crest after all (or so I've heard).

Thanks, Al! That's been bugging me like you can't imagine.

The phrase "Sweet mother of Robert T. Bakker" is now something that will never leave my personal lexicon.

Albertonykus is half-right. At SVP in Bristol, more specimens were described that show that its crest was more like a tall, exaggerated corythosaur/hypacrosaur crest, shaped something like an axe blade, and did indeed trend forward. That "unicorn horn" is basically just one bit of the crest.

Actually looks really awesome when complete. I really hope that paper is published someday (maybe it has been and I missed it?).

Fishy - Always happy to spawn a meme, however small. (But dear lord, the comments over at YouTube...)

Zach - Oh, I'd love to see that paper too. Though I think I might have seen an illustration somewhere recently of a hadrosaur with such a crest.

I actually own the entire magazine series of which this book is made.

"But before we do that, let us shake our fists at Target. Sweet mother of Robert T. Bakker, you gotta be kidding..."

For shame, Target, for shame.

"Well, I don't know if fun is the right word, but I've probably got enough weird images to share from this one book to last the better part of the month."

Hooray, a month's worth of blog posts (at least partly) inspired by me!

"According to my six-year-old girl cousin, nature spirits who sometimes appear as tiny people with insect wings and have a thing for flowers and mushrooms = ridiculous. Aerodynamic giant Arctic cervines with bioluminesent snouts in the service of a fat man living at the top of the planet = perfectly feasible."

In other words, Santa Clause > Fern Gully? I'll buy that.

"Ignoring the weird Pteronodon for a minute: "Dinosaurs did not fly. Ever. So shut up, you.""

That made me LOL, making it my favorite part of this blog post.

^^ More like Rudolph vs. Fairies. Or in her words,

Me: "But if a flying reindeer with a glowing nose is real then why can't there be Fai-"

Her future first grade teacher's going to have a fun time with her. O_o

Even still, I can understand where she's coming from. I mean, the former(I.e. Otherwise normal reindeer w/magical flying abilities) is a smaller stretch of the imagination than is the latter (I.e. Insect-sized humanoid creatures w/magical flying abilities). There's even an explanation for the red nose ( http://www.youtube.com/watch?v=o70mZQod06g&feature=channel_video_title ). However, I'd keep an eye on her if I were you. Based on her argument style, she could grow up to be a lawyer.