I'll tell you up front, I wasn't kidding when I said this was the most frustrating of all the books I've reviewed for Retro-Paleoart Month. There may be some foul language ahead. The awful, awful full title of the book in question is Raptors! The Nastiest Dinosaurs, and it's written by Don Lessem, published in 1996 by Little, Brown and Company.

What'd I tell ya?

For those wondering what the big deal is, the maniraptors throughout the book - and this is especially remarkable when you read the introduction and find that the whole impetus is "Jurassic Park" - are exhaustively researched and anatomically accurate. The book does not do the usual "F*** it; let's just copy 'Jurassic Park' again" approach, nor does it contain a single 80's HMNH style maniraptor (big and burly, huge head, skinny little kangaroo hands), like we've been seeing all month. This is unspeakably refreshing. My gosh, they have propatagia (that gross tendon-thing on the leading edge of the wing you're not sure whether you should eat or not). They have propatagia!!! 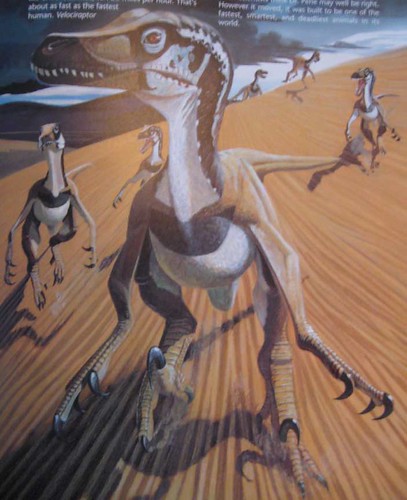 All of the Maniraptors are bare-ass naked. 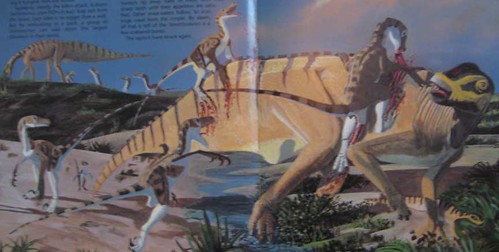 And that's a damn shame. A big, damn shame. Because the art is really really good. The painter went all out in making his 'raptors as avian as possible, posing them like badass birds of prey. And then no feathers. Not a stitch (or filament, whatever.) 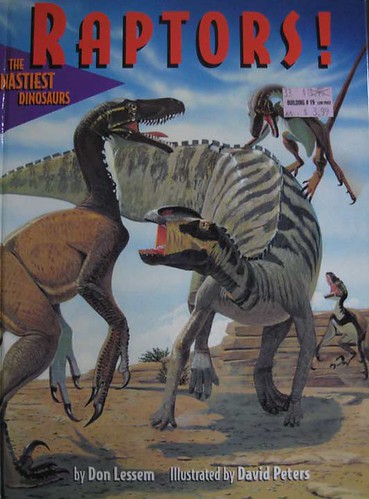 The "fun" begins right on the front cover. I mean, what do you even do with a book like this? What do you...

And yes, it is THAT David Peters (as per a helpful comment in the Nemo Ramjet piece I am about to link to in a couple of paragraphs)! Hahaha, oh, WOW, David Peters... 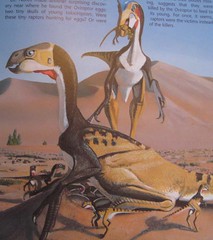 Hoo. Okay. Some of you probably do not know who David Peters is; I will tell you.

So you know how we saw that John McLoughlin had some theories about ceratopsian anatomy that were... different? Yeah.

David Peters was once a very accomplished dinosaur artist, but today he no longer paints much. He is now notorious for having some theories about pterosaur anatomy and biology that are... very different. Many would argue that they approach the "This no longer looks like an actual animal that could have actually existed on this planet" level of different. Interpretations of his theories can be seen here and here. Have a strong drink ready. 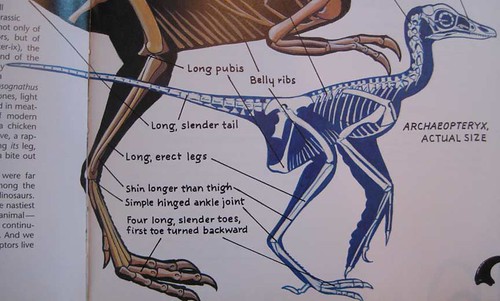 So now that we know who illustrated the book, that makes some of the maniraptor appearances... more confusing, really. See, Peters' rather controversial methods include interpreting every little mark or stain surrounding a fossil animal as *part* of the animal.

So why is Archaeopteryx naked? Archaeopteryx, the one feathered raptor even the scaly raptor fanboys can't deny. WHY IS SHE NAKED?!? Why why why?

OK, I can't bear to bang my head against the desk anymore, so lets just end here with the funniest illustration in the book: 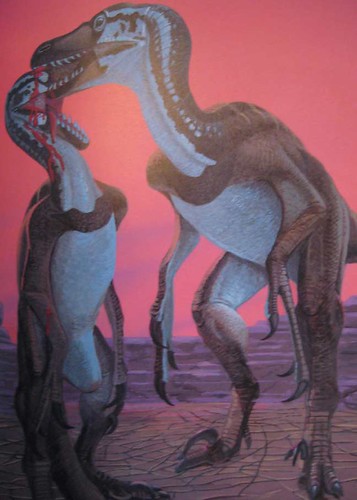 UPDATE UPDATE UPDATE: The PaleoKing has a major update relevant to this blog post and I will not ruin the fun by explaining any further. Go there now, dear reader! (And now I have more books to look for.)

Well, older art. Since it needs to be emphasized: 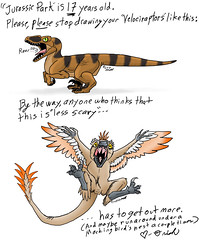 Teal Deer: Naked 'raptors look stupid. They do. You B.A.N.D. types need to get over it. (Addendum: I love you, Pristichampsus.)

(Although looking at this piece, which I dashed off while in kind of an emotional state, I may have to do the George Lucas thing to it...)

Other Person's Art of the Day!

Phil Tippet has a YouTube Channel, and he has been sharing some of his early "Go Motion" work. One of his best-loved recent uploads is "Prehistoric Beast", which Tippet made to basically show off what he can do with metal, foam rubber, and plastic flowers. This is the first time I've seen this piece in it's entirety and... wow... WOW!

Additionally, some of the stop-motion work of the Chiodo brothers (they're best known for the all-too-brief analogue animated sequences in "Elf") has popped up on YouTube. This sequence is from an educational videotape called "Son of Dinosaur", and it is pretty much the cutest thing ever.

Squee! I want one!

Announcement: Boston Comicon is this weekend!

Yeah, I think I'm ready for it. I'm not sure when the next update will be, which is why the last few posts have been rather "meaty". Wish me luck!

Even more tragic is the fact that the first unequivocally* feathered non-bird dinosaur was described right in 1996, so had this book been written just a little while later we might have gotten feathered dromies and oviraptors.

I've certainly seen some of David Peters's other older works and they're also quite good. Shame...

"The awful, awful full title of the book in question is Raptors! The Nastiest Dinosaurs, and it's written by Don Lessem, published in 1996 by Little, Brown and Company."

That's 1 of my casual reading dino books (I divide my dino books into "casual reading" & "serious reading"). It's too bad Lessem stopped writing good books after the '90s. For a better (I.e. More recent/accurate) 9-12 book, I recommend "Raptor Pack" ( http://www.amazon.com/Raptor-Pack-Step-into-Reading/dp/0375823034/ref=pd_sim_b_1 ), which gives the best idea of what eudromaeosaurids were like when alive AWA how we know what we know.

What's propatagia? I couldn't find it in my dictionary of choice.

What's gorram? I couldn't find it in my dictionary of choice.

"Well, lets just end here with the funniest illustration in the book:"

That (in addition to the Oviraptor pic) is 1 of my favorite pics in this book. I mean, what's more bad@ss than biting through your enemy's skull & acting like it's no big deal?

"Yeah, I think I'm ready for it. I'm not sure when the next update will be, which is why the last few posts have been rather "meaty". Wish me luck!"

Propatagia: The membrane between the wrist and shoulder.

Cheiropatagia: The membrane connecting the body and hands (and fingers in bats).

Uropatagia: The membrane connecting the legs, feet, and tail.

Birds only have propatagia (although some have small cheiropatagia between the tricep and body) while pterosaurs and bats have all three.

So all people named 'Peter' is crazy insane, eh?

Aw, I'm sorry, I didn't mean that. I just thought it was kind of a weird coincidence that there were two very strange people whose last name happened to be Peters. (But I will go back and clarify that before I accidentally offend every Peter out there...)

I have a book on human evolution by Peters geared towards young readers that's actually quite excellent . . . I wonder what the heck happened there?

The weirdest thing about Raptors! is that David Peters published a book nearly seven years before with a feathered Deinonychus and Coelophysis in it.

Hi Dave Peters here. Don Lessem specified "no feathers." As noted above, earlier books I wrote and illustrated had feathered dromaeosaurs. That's the backstory. Re: your other issues, please make comments on specific items at reptileevolution and pterosaurheresies and I'll make repairs if valid.

These seriously look like freshly-plucked Thanksgiving turkeys to me.