Syntarsus and his Badass Mohawk

You're getting a post about old Paleoart. Specifically, an odd and very esoteric reconstruction of an animal that has, as far as I can tell, faded into obscurity.

(A disclaimer: I have no idea who the illustrators of these images are, as they were uncredited in the websites I found them. I apologize for this.

Also, I'm secretly hoping that this gets the kind of "OMG, I remember those" reactions that the two "Firfells" posts did. Please help me recall more of these!)

If you were reading a cheap dinosaur book at some point in the 1990's, you would very likely run into an illustration like this one: 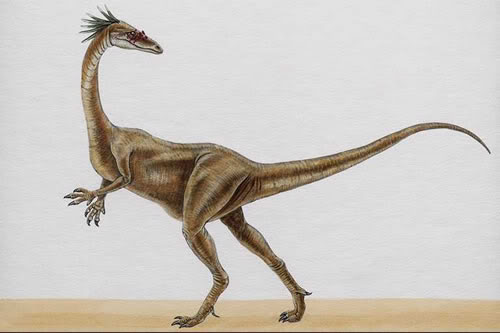 The animal would be helpfully identified as "Syntarsus". This is in spite of the fact that Syntarsus is a kind of bark beetle. "Syntarsus" is now more accurately identified either as it's own genre, Magapnosaurus (which translates to "Big dead dinosaur" -- not quite as unfair as "Pantydraco", but it's close) or as a species of the famous genus, Coelophysis. In fact, "Syntarsus" would be almost identical to Ceolophysis (my spellcheck hates this post so far) in the dinosaur books of the 1990's... were it not for that Mohawk.

You see, for whatever reason, every artist in the early 1990's decided that (a) "Syntarsus" was a valid genre and that (b) he HAD to be drawn or painted with those long plumes on the back of his head. As far as I am aware, there's no evidence for or against "Syntarsus"/Magapnosaurus/Coelophysis sporting long feathers, so this Mohawk is basically coming from nowhere. Here's another example, from a set of trading cards: 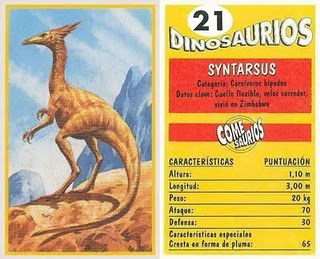 The two illustrations I've shown so far are unusual, because Syntarsus' Mohawk actually looks like it is made of actual feathers. Most of the illustrations I remember would look a lot more like this: 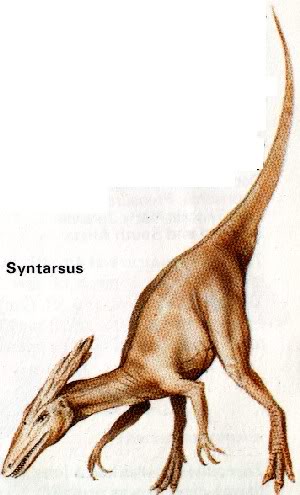 This is a classic "Syntarsus". You can't tell if the crest is made of feathers or bone or what. I even recall some cheap dinosaur models (these have a tendency to take the most famous depiction of prehistoric creatures -accurate or otherwise- painfully literal) that looked like a Parasaurolophus head stuck on a theropod body. Now I think I understand why. 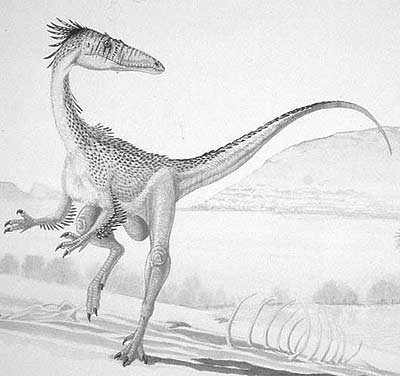 Here's the most recent "Syntarsus" I've found. I can tell because he doesn't have the dreaded Kangaroo Hands. This almost has a Gregory S. Paul feel to it.

Major Addendum: Thanks to a really stupid mistake on my part (in essence, I clicked the wrong thing), this wonderful comment from Matt Celeskey was accidentally deleted. Fortunately, I could still see it in my email and rescue it's content:

Great post, Trish - I remember wondering the same thing in the early-mid 90s.

I think this meme can be traced directly to an illustration in Bob Bakker's 1975 Scientific American article, "Dinosaur Renaissance." The illustration, by Sarah Landry, depicts a feathered Syntarsus chasing an Icarosaurus-like gliding lizard across a sand dune. The Syntarsus has a crest of long feathers on the back of its skull but the depiction is somewhat ambiguous - if you weren't familiar with the dinosaur you might suspect there was a Pteranodon-like crest under the feathers. I've got a really bad copy of the article, but I can send a scan of the image if you like.

I also suspect that the discovery of "Syntarsus" kayentakatae, with small Dilophosaurus-like crests, might contributed to the meme, since you could find mentions of "crested Syntarsus" in some literature.

Thanks for tackling this topic!

Matt got in contact with me again through Flickr and shared the illustration from "Dinosaur Renaissance". I've cropped it a little to focus on Syntarsus:

Given the similarities between this and the "classic" Syntarsus above, I have almost no doubt that the "Mohawk Meme" started right here. Thanks again, Matt!

Another Major Addendum: Warren Beattie found this post through a link at DinoGoss (thanks Matt!) and had this information to add, via email:

I remember the trading card and the 'almost Greg Paul' illustration from the early '90's. They were from an educational partworks series in Britain. (Well, obviously that printing of the card isn't British) The title was Dinosaurs! and it was published by Orbis Publishing. (now part of De Agostini) I guess it was riding on the back of Jurassic Park's success, but the magazine was pretty good and informative, rather than sensationalist and stupid. It had FAQs by Dr. David Norman in the back! It taught me a lot about dinosaurs when I was a kid. Compared to the crusty old books I'd read before JP, it was like having my own personal Dinosaur Renaissance.

The magazine hasn't aged too badly, though there is a scarcity of feathery theropods as you might expect. I think it suffered most from the usual problem: illustrators who didn't have a clue what they were doing, and/or who obviously cribbed from much better, knowledgeable illustrations. Even at that naive young age it hurt my eyes to see stuff like this. (Trish: Oh hell, that cover art is AMAZING/hilarious/God-awful all at once.)

A few of the illustrations seem to have been appropriated by the London NHM's website. A lot of their Dino Directory's illustrations were previously published in Dinosaurs!, including that GSP-style Syntarsus. The artist in that case is Graham Rosewarne, one of the better (read: actually competent) illustrators for the magazine, who definitely had a strong GSP influence. (I'd say he has a better knack at making 'em look like living 3D objects, though) He stood out so much that it was the first time I took notice of who drew anything in any book or publication. That's one of his few feathered theropods, though. The only other one I can remember was a Coelophysis decked out in black turkey feathers, for a "feathered dinosaurs might have looked like this!" article.

Thanks for all the new information everyone!

Yet Another Major Addendum!

I have found so many Mohawk-having Syntarsusesess (?) since this post!

Feederwatch Thursday! Lousy weather, as always, has it's good side. Here it's two different Cardinal couples!

Sketch of the Day! Toucans! 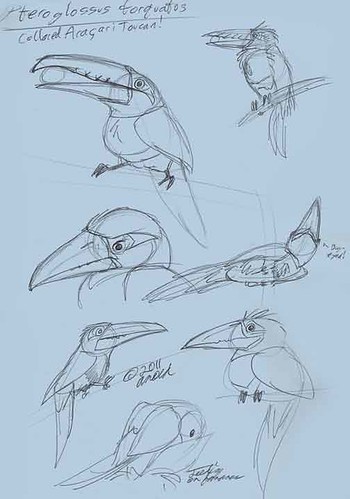 Awesome! I'd love to know how the mohawk meme started with this critter.

I also had a heck of a day at my feeders this week - on Tuesday, I had 7 eastern bluebirds at the same time, a really super rare occurrence.

i too recognize that one from the "worst" dino book i ever owned...

sadly i disposed of my copy years ago (got to love moving eh).

there is no evidence for that plume/mohawk... yet i always found it funny how people resisted feathered dinos in the 80s, despite that guy being in EVERY dino book from the 60's...

"I had 7 eastern bluebirds at the same time"

Words cannot express how much I envy you, because in approximately fifteen years of birdwatching, I have NEVER SEEN A BLUEBIRD. <:C

^^ Syntarsus is from the sixties? Funny, I thought this was strictly an early '90's thing.

Note: there was an excellent post that accidentally got deleted and should have gone right here. I have added it to the body of the post.

Matt Celeskey beat me to that comment. I remember seeing the illustration in the library of a school I used to go to. (As with most school libraries, it was useless for dino info, with only one dinosaur book that was written after the late 1900s, and that was a children's book. But it had that elusive article.) Of course, I no longer have access to it now.

I have a dinosaur book from 1991 (before the discovery of Sinosauropteryx) with a "Syntarsus" that, strangely enough, not only has a mohawk but also a full coat of downy feathers(!). The text even mentions that it had feathers and is thought to have been the ancestor of birds (!) as though this was actually confirmed. The author must have taken all those other feathered "Syntarsus" images a little too literally.

^ I'm ready to bet that your 1991 dinosaur book is a children's book, Al. They're not as bad as cheap toy makers, but they also tend to be a mine field of too little fact-checking, too much "aw, we'll just base everything on the most famous depiction of the animal in question." I may have a post in me about this later...

I'll confirm your suspicion that it's a children's book. Its descriptions of other dinosaurs tend to be comparatively mellow (for its time), however. It's just the "Syntarsus" bit that really stands out. (Although I haven't read it since forever and might be forgetting other big bloopers.)

I also remember a similar illustration and I checked my book collection: I found it on a book called "A field guide to Dinosaurs: The first complete guide to every dinosaur now known", first published in 1983.
This book has a very similar Syntarsus illustration, only without colour, in a slightly different position and less ugly-looking.
The name of the artist is "Bakker" according to the text, but I'm not sure if it's the same person that did that illustration you say

^^ Well, Jose, chances are pretty good that the illustration you speak of is a copy of the Robert T. Bakker illustration I recently added to the post. Thanks for the information! I may have to keep an eye out for that book.

"Specifically, an odd and very esoteric reconstruction of an animal that has, as far as I can tell, faded into obscurity."

Trish, Syntarsus was not a food (Let's see if you get the reference).

That's the 1 I grew up w/from "The Humongous Book of Dinosaurs".