I Hope the Titanosuchians Love Their Children Too... - Let's Read _The Synapsida_ 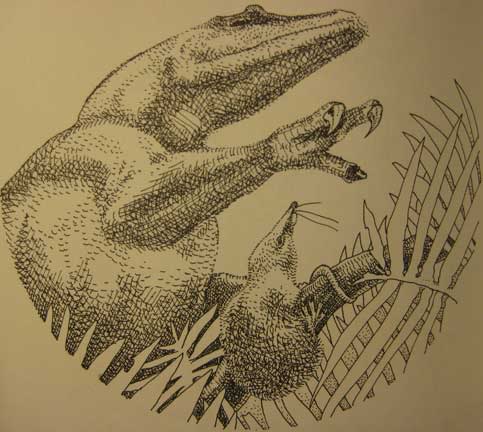 I know next to nothing about early mammals. There, I was honest. I can lecture you into oblivion when it comes to the natural history of birds (thank you, Gregory S. Paul and your beautifully illustrated doorstopper), but when it comes to our furry little titty-sucking (record-scratch sound effect)

Yes I did just say that. Because we are going to be talking about mammals. And I know this is going to blow your mind if you are the kind of person who thinks the split-second sight of a breast is going to corrupt your children (even after they spent the better portion of their babyhood attached to one), but the one defining characteristic of mammals, the one thing that separates us from all other animals, it isn't the hair, it isn't the live-bearing of our young, it is the mammary glands. Deal with it.

Aaaaa-nyway, when it comes to our furry, titty-sucking forebears, I am totally clueless. This is not entirely for lack of trying: There are hardly any good books at all about "proto-mammals" (which I know is an old term, but a lot of people grew up with seeing it when this subject was ever brought up, so I'm only using it so more people will know WTF I'm talking about). Most people have only ever heard of Dimetrodon and the majority of them think that thing is a dinosaur anyway, because if your skeleton is on display at Harvard Museum of Natural History, you're a dinosaur, right? (No, really. I have overheard as much.)

Enter our old friend John C. McLoughlin, he of the unique and often very nice pen and ink illustrations and, err, equally unique ideas about the anatomy and behavior of prehistoric creatures. Published in 1980 by Viking, in the wake of the far, far better-known The Archosauria, The Synapsida is an attempt to tell the complete story of mammals. Turns out it's a very interesting story, though unfortunately I am unable to call B.S. or not on some of McLoughlin's claims (though it turns out that the "Walking With Whatever" writers weren't the first to come up with venomous synapsids).

But what we're really here for are the illustrations. And McLoughlin's draftsmanship is phenomenal, even when the animals he is drawing aren't the prettiest things: 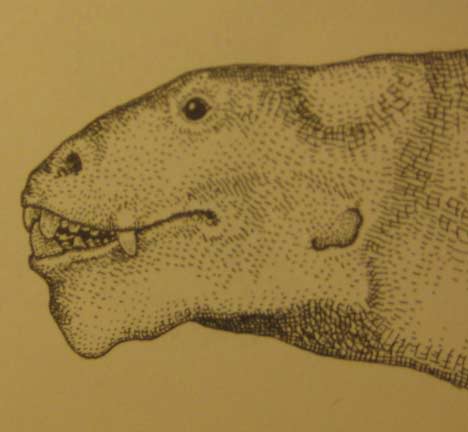 Venyucovia here might give us a hint as to why you don't see scads of kid's books, stuffed animals, big Hollywood movies, and cartoons of questionable educational content about Synapsids. By now, we know how to make dinosaurs "cute", what the heck do you do with this thing?

Undaunted, McLoughlin introduces us to all the strange creatures at the base of our family tree. I mean it when I say ALL of them. His history of mammals starts with early Chordates and doesn't stop until we hit humans. And humans, by the way, are bastards. 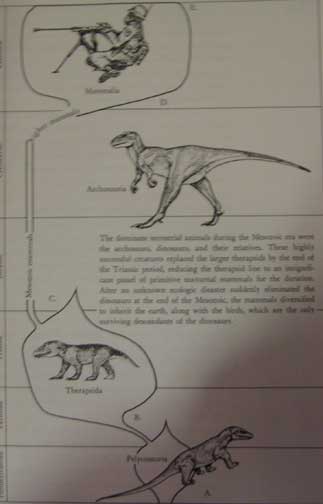 Really, that's the strangest thing in the book. McLoughlin wears his politics right on his sleeve, and seems almost ashamed that the majestic beasts he chronicles in the book gave rise to us. Here's an example of how jarring this can get: 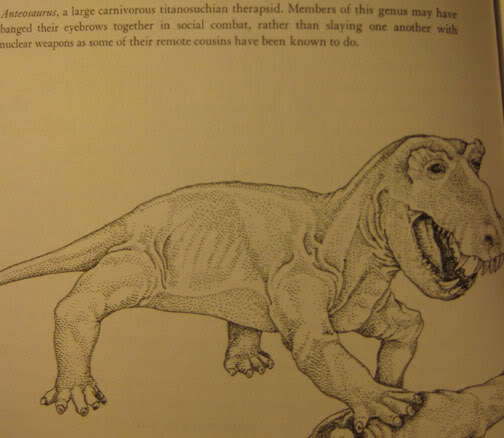 Subtlety is not one of McLoughlin's strong suites. There's another odd moment where he describes the fascinating story of the Pelycosaur, Cotylorhynchus, the world's first very large herbivorous four-legged animal. It was able to survive in a colder climate than any of the animals that could have preyed on it. The animal in question is a big, monstrously fat critter with a disproportionately tiny head and nothing at all to worry about. McLoughlin invites America to look at the horrors of our inevitably morbidly obese future when viewing his illustration of the unsuspecting beast. 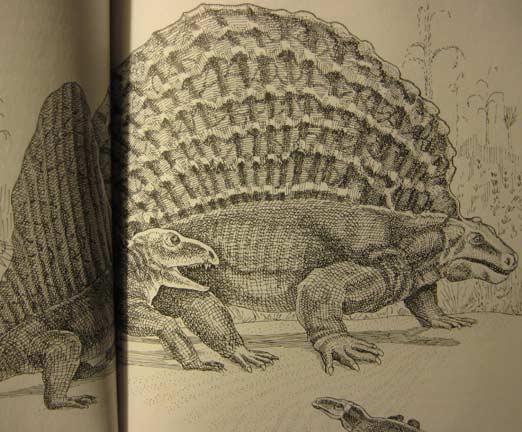 Aww, look how ugly-cute he is! Here with Edaphosaurus who, it turns out, isn't a close relative at all (though they are both Pelycosaurs)! See, I never knew that because my childhood books couldn't be bothered to spend more than two pages on these guys.

Speaking of ugly-cute, here is a confusingly-named Dromosaur (not to be confused with those more famous guys with the fluffy feathers and the large talons). McLoughlin informs us that this little fellow has been discovered preserved in a sleeping position with his tail wrapped around his body. Given that McLoughlin was one of the first paleoartists to illustrate theropods with feathers, I'm honestly surprised he didn't give this guy a coat of fur. 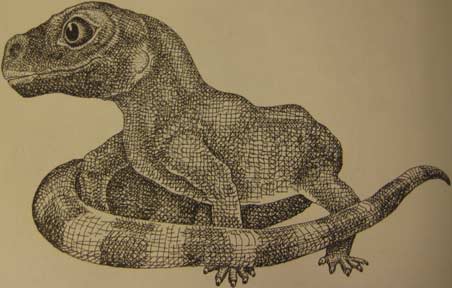 Fact is, fur doesn't appear at all until late in the book. Even then, all we get are a few whiskers at first: 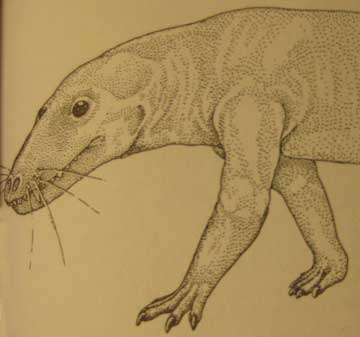 Again, I don't know very much about these animals. I have no idea if there have been any skin impressions found from them. I can't begin to guess where hair would have first appeared on mammal-like creatures in the fossil record. It seems this Thrinaxodon would be a good candidate for being furry, so it's very strange to see McLoughlin restore him naked.

Or... maybe that's just how McLoughlin renders fur; through stippling? Take a look at this... animal... we'll call him Generic Cenozoic Critter: 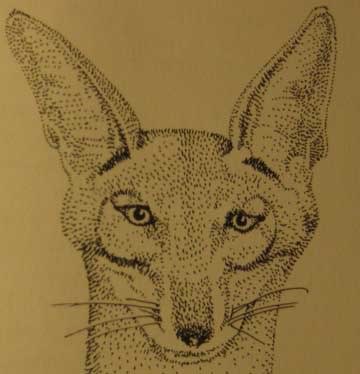 All in all, The Synapsida is not the strange ride that is The Archosauria, but it is definitely a worthwhile read. You will, at the very least, learn about some very fascinating animals you may have otherwise never heard of.

Feederwatch Friday! I forgot to do this last week, but I've been sick:

Festive Thing of the Day!

I sat down at the computer after setting up the TREE, covered in sap and bruises and scratches, when what to my wandering eye should appear but a Bad Santa Gallery! Numbers 7, 24, and 25 are my favorites. (Some NSFW ads.)

30 Photos Of Children Terrified Of Santa

Here are doodles I drew while watching the Quincy Christmas Parade. And being violently sick (my sinuses are still painfully dry, but I am otherwise feeling much better). 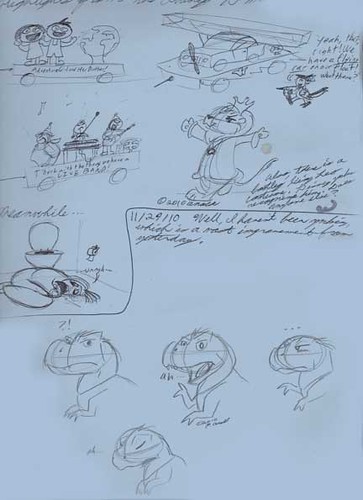 I'm not someone who can talk a whole lot about the early synapsids (or even just synapsids in general), either, but I think Euchambersia has been suggested to be venomous in the lit, so venom in basal synapsids is probably based off that.

"I know next to nothing about early mammals. There, I was honest."

I know what you mean. However, if you're interested in knowing more, the following books might help (I say "might" b/c I haven't yet read them in their entirety, but what I have read is good).

"I can lecture you into oblivion when it comes to the natural history of birds (thank you, Gregory S. Paul and your beautifully illustrated doorstopper),"

Are you referring to "Dinosaurs of the Air"?

"Which means I finally get to trot this number out (and feel free to use it if you agree):"

As far as the Katy Perry and Elmo macro, I was originally looking for the Janet Jackson and Justin Timberlake Superbowl incident that I think the broadcasters are *still* in trouble for, like eight or nine years later! Point is, kids spend their first few months attached to a breast, half the population has them, why freak out about kids seeing them (even just a hint of them like in the censored "Sesame Street" segment)? It's ridiculous.

And thank you for reminding me that I need to finish _Dinosaurs of the Air_ one of these days, LOL.

My plan to scar you for life was a success! Muahahahaha!