In Which we Wintess the Slow Extinction of Saturday Morning Cartoons

The exact reason for the gradual phasing-out in the late 1990's of animated programs for children airing on the big three networks on Saturday mornings is highly disputed.  Many argue that the readily available children's programming on Nickelodeon and Cartoon Network rendered Saturday morning cartoon blocks irrelevant.  Others note that networks probably found the 1996 FCC mandate that required at least three hours of educational content for children too restrictive.  And still others will point out the most cynical reason: airing blocks of mostly infomercials instead of a block of cartoons on the weekend was the cheaper, more profitable option.

But whoever you argue this subject with, almost everyone will agree that the beginning of the end, the Chicxulub meteor of Saturday morning cartoons if you will, was the premier of "Saved by the Bell". And that brings us to this remarkable video lurking quietly in my YouTube queue.  It's the first-ever appearance of the "Saved by the Bell" characters on NBC, on a weird special promoting (ironically enough) Saturday morning cartoons.

Now as I said before,"Saved by the Bell" has shouldered a lot of the blame for killing the Saturday morning cartoon tradition... but let's take a look at NBC's lineup here, because the animated alternatives to "Bell" suggest that the death of Saturday morning cartoons was a more excruciatingly slow process.  We've got the very bizarre final season of "The Smurfs", the second-to-last season of "Alvin and the Chipmunks", and two animated "Alf" series, one of which is completely given over to parodies of other things.  New series included the improbable "Camp Candy" and "Captain N: the Half-Hour Nintendo Game Commercial".  A look at other networks' schedules from the same year reveals several long-incumbent series broken up by head-scratching new series.

So with this in mind, I am willing to say definitively that the reasons for the big three networks essentially giving up on Saturday morning cartoons are complicated. 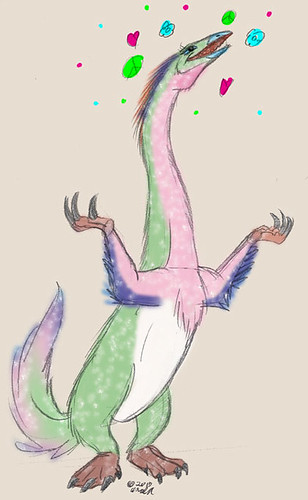 Thanks for commenting on my blog!

As for the death of Saturday morning - yeah, it's pretty much a combination of everything you mentioned. I read somewhere it was also because most networks didn't WANT to air animated cartoons, and when they finally had the excuse to end them, they ended them.

Also - I noticed you wrote about Fluppy Dogs! I reviewed it a while back, and came to similar conclusions, including the wonky, inconsistent animation.