As I promised I would way, way back in January. 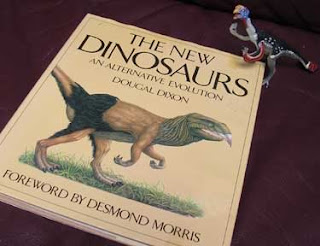 Now, let me state right out: I'm not going to point and laugh at Critique Dixon's science. (I'll leave that to Richard Dawkins and others.) This book was published over twenty years ago. The creatures were very likely invented well before that. And science, as we all know, marches on. Just one example: Yeah, there was lots and lots of speculation. But honestly, if the number of jaws that dropped when Tianyulong's discovery was announced is any indication, nobody - NOBODY - could have seriously imagined a downy dinosaur who wasn't a theropod.

All of Dixon's speculative dinosaurs have a furry body covering. But the first weird thing I noticed was just that: they are covered in fur. Not feathers or down, fur. It looked weird then and it looks weird now, but I guess you can pretend it's all pycnofibers, down, dinofuzz, or whatever.

There are also a fair number of classification SNAFUs. It wasn't very long ago that all small theropods were classified as "Ceolurosaurs" and all the big ones were classified as "Carnosaurs". (In hindsight, this makes as much sense as putting Ocelots and Foxes in one category and Lions and Wolves in a different category.) It's going to be a little harder to ignore this but I'll try.

I'm approaching this book strictly from a creature design standpoint. Which animals still look plausible and which ones don't hold up? We'll start with the animals who are still pretty cool. As with each of these posts, the animals will be listed in the rough order you meet them in the book.

(NOTE: In case you are heading over to Amazon to read along with me, make sure you don't confuse The New Dinosaurs by Dougal Dixon with The New Dinosaurs by William Stout. Not that Stout's book isn't awesome in it's own right, but couldn't he find a better name for the reissue?)

(Illustration by Philip Hood.) The Bricket was my favorite animal in the book the first time I read it and she remains my favorite. I still draw hadrosaurs that look like her to this day. I also love those stripes on her tail. Bricket wins my "Most Plausible" award. 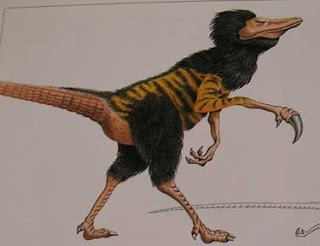 (Illustration by Philip Hood.) The Northclaw's biology is a little dubious. He looks like what happens when you write your book during a time when Baryonyx is stuck in with what we now classified as Maniraptors. Because they all have large talons. So they must be related. Yeah.

Anyway, asymmetry is always fun to see in creature design, and this badass is no exception. I'm not sure about the main weapon being attached to a long, skinny modified hand bone though. 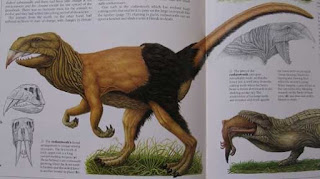 (Illustration by Steve Holden.) The Cutlasstooth is even more badass. This guy was another favorite of mine when I first read this book and I ripped that facial structure design off many times in my algebra notebook.

Then I started wondering exactly how he's supposed to chew... 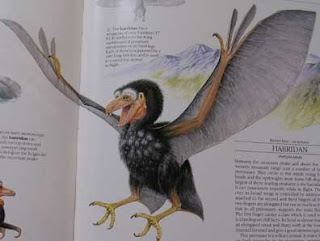 (Illustration by Denys Ovenden.) I'm ending this post with a Pterosaur. I can't tell you how many times I've drawn creatures with Harridan-style "false feathered" wings. I'm not sure how aerodynamic this would actually be, but it looks cool.

There are, as we shall see, quite a few of them...

Happy "Star Wars" Day! Funny, I had to be reminded about this by the other blogs in my watch list, yet I have a post for Towel Day already written and ready to post. Huh.
Posted by Trish at 7:00 AM

When I was in second grade the cutlasstooth caused me to go around arbitrarily saying, "A cutlass can cut through anything, even diamonds!" without actually knowing what a cutlass was other than it was a kind of weapon. It's strange that I liked the cutlasstooth, because at that time illustrations of saber-toothed cats tended to scare me. Maybe not being drawn in a snarling, leaping frontal view helps.

By the way, if the cutlasstooth is anything like other theropods (I don't remember any of the details I read in The New Dinosaurs) my guess would be that it didn't chew at all.

"if the cutlasstooth is anything like other theropods ...my guess would be that it didn't chew at all."

Yes, good point. I actually didn't really mean "chew", but it was hard to think of a succinct way to say "cut food up with it's teeth in order to swallow it".

"I also love those stripes on her tail."