This was a lot of fun! First, the Twitter thread that started the whole thing:

I eventually did use the grid thing for the cleaned up color version: 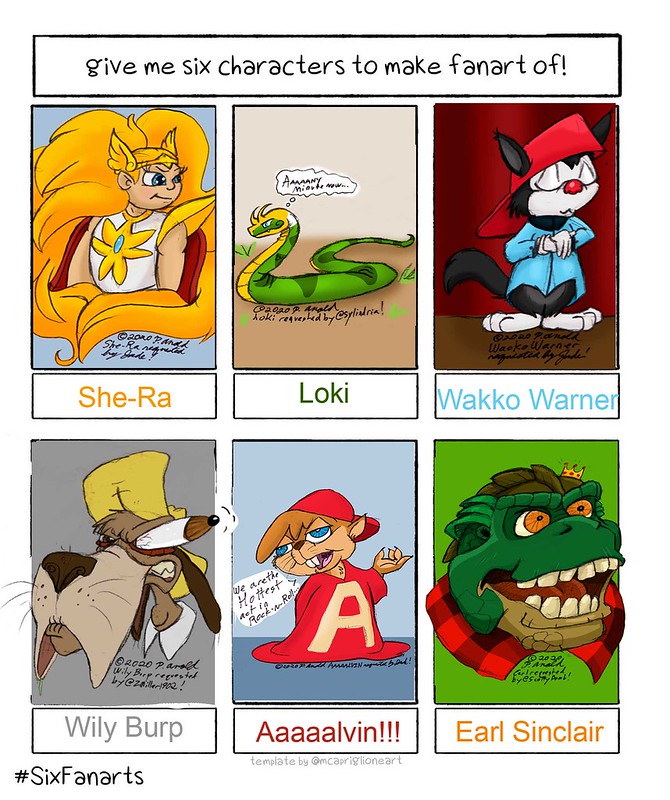 And now, closeups of each color version! 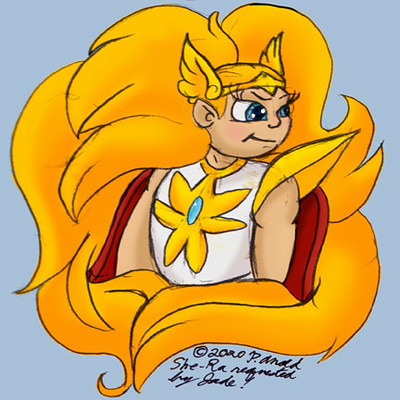 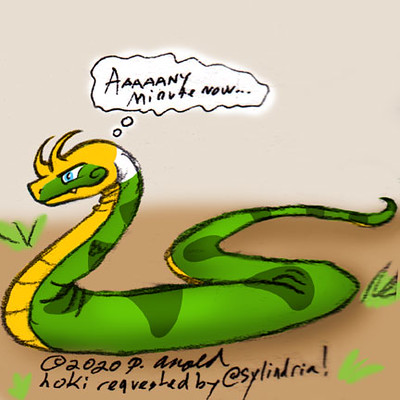 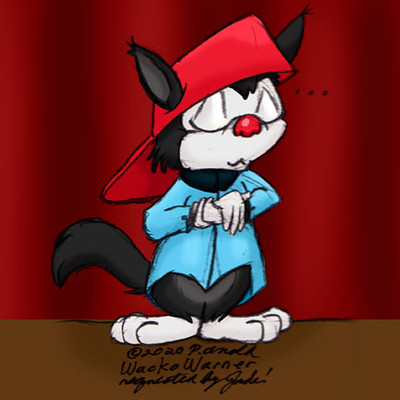 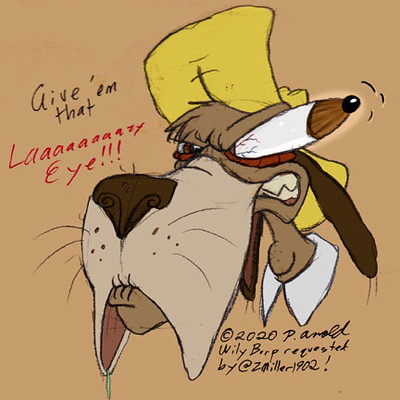 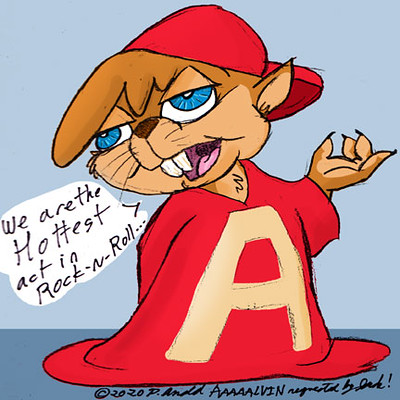 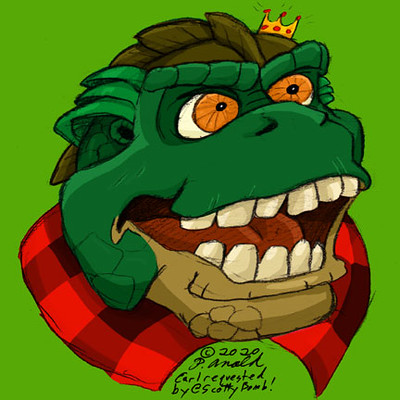 I think it's fair to say that the good folks at Retro WDW.com helped save a very very weird holiday weekend by sharing this particularly good seasonal weird vintage Disney Parks special.

* - The commercials!  The ads for Sea World ("Make contact!!!"), Kissimmee St. Cloud, and "Adventures in Wonderland" especially slammed a nostalgia button I didn't know I had.
* - Roger Rabbit as a walk-around character!
* - Never mind him, the Teenage Mutant Ninja Turtles as walk-around characters?!
* - Never mind them, the Sinclair family from "Dinosaurs" as walk-around characters?!?  I bet you can't guess what song they get to dance to!!! 😔
* - The Spring Break montage!  Possibly cut down from an entire Spring Break at Disney Parks television special I seem to remember and which in hindsight feels ill-conceived.
* - The fabulous finale and musical number!  I don't have enough gigantic frilly dresses in my life.
* - The "Fantasmic" preview.  All of it.  The whole thing.  This is worth watching the entire special for because it is bonkers.  And very definitely something made in the immediate wake of "Home Alone".  Trust me, you'll be able to tell. 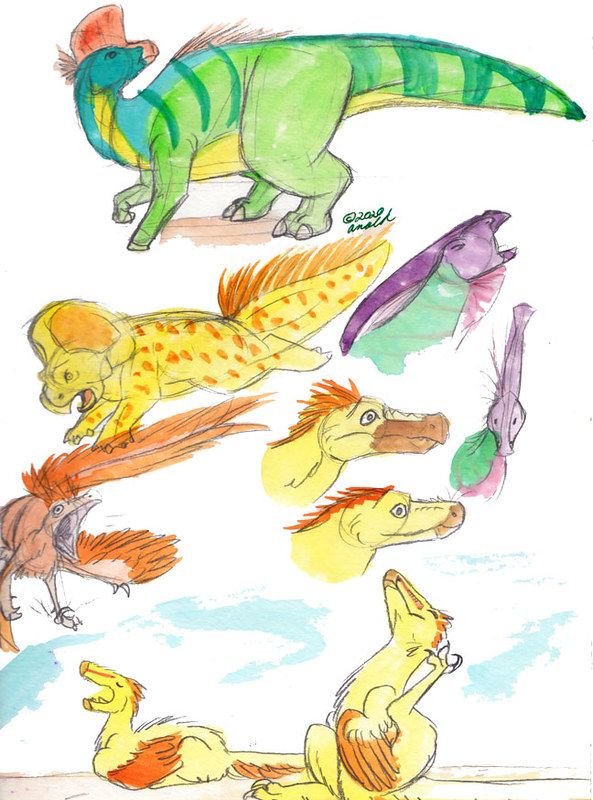 Approximately five and a half million years ago*, my family and I went to Walt Disney World.  As usual, I took loads of photos at Animal Kingdom and did sketches of the residents.  Mostly birds, of course.  Enjoy: 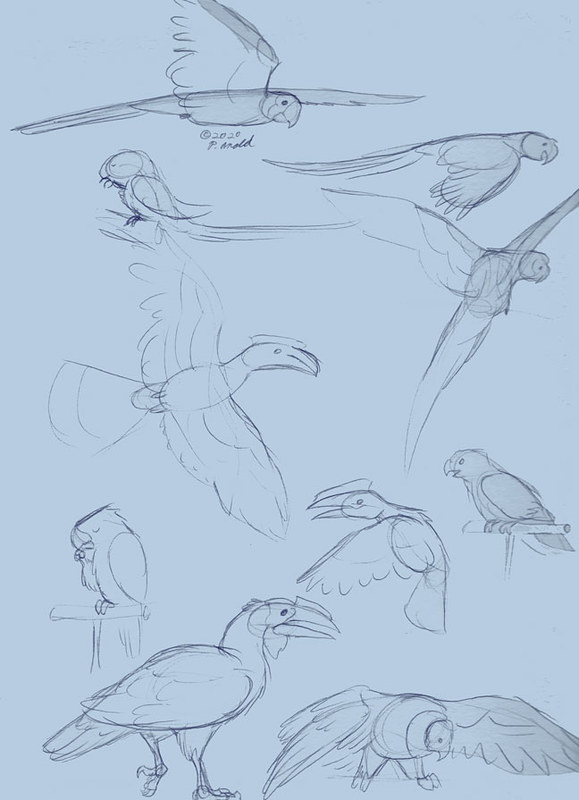 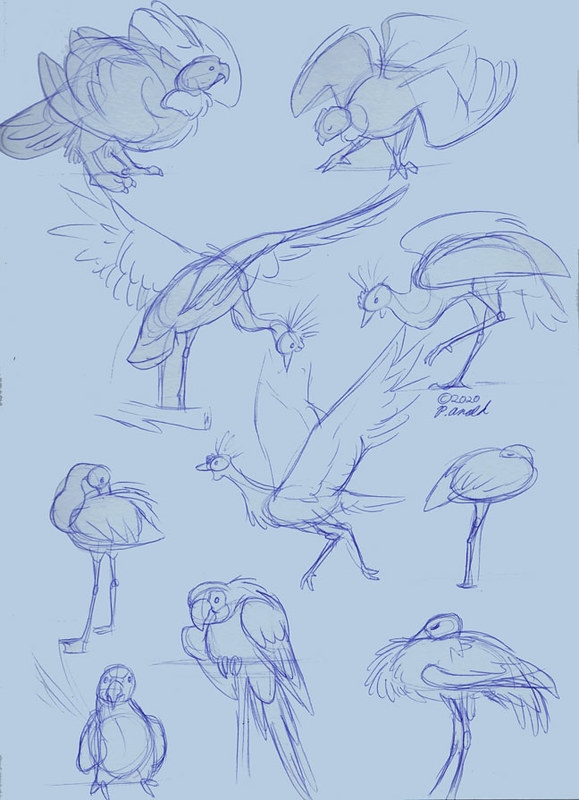 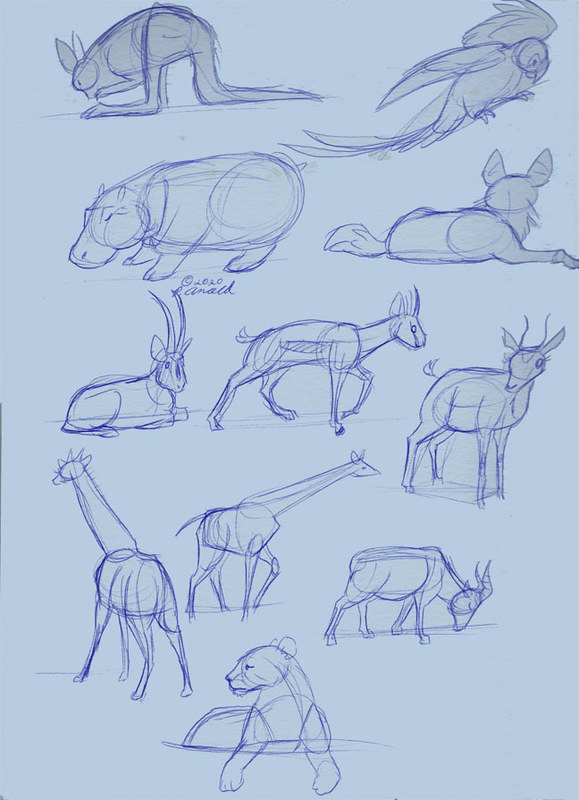 * - It sure feels like.  In reality it was only three weeks ago which seems impossible.  I'd like to do a trip report once it doesn't feel like a big fun and exciting blur that happened ages ago.
Posted by Trish at 7:00 AM No comments:

I can't offer you much in these Interesting Times, but I can offer you some recommendations what to binge watch while we're all stuck indoors.

I've done a few series marathons in the past in the good/bad old pre-streaming days and thankfully it's easier than ever to binge some of my favorites like "Gummi Bears" and "Fraggle Rock".  The former is available with Disney+ over which quite a lot of digital ink has been spilled and my extremely controversial opinion is that it is Good.  For one thing, it enabled me to finally, finally binge "Gargoyles", something I've been meaning to do since at least the late 90's and has been really difficult, up until Disney+ gave ready access to nearly every Disney Afternoon series.

Here's the trip report.  It gets a little spoilery the further in I get so either read it after or watch along with me.  My other really controversial opinion is that "Gargoyles" is excellent; easily one of the best animated series of the 1990's.  I'd go as far as to say that this is a series that tells as elaborate an ongoing saga with as well-developed characters as "Game of Thrones" except it's much more consistently good at it.

All that and you're internal dialogue will be voiced by Keith David for a while.

I am heading down to Walt Disney World very soon!  Goodness I can't wait to experience the whole Rise of the Resistance Boarding Group insanity for myself!  Ha ha ha (please keep my family and I in your thoughts and prayers) ha ha!  😨

So as is tradition, let's travel back to the long-long ago and watch a weird vintage Disney Parks special.  Now this particular special is mostly here due to unabashed nostalgia.  I haven't seen this in ages and can't believe how much I remembered from it; it's almost certainly my first encounter with most of these songs and artists.  I'm not going to say it's outright good, you don't even see much as far as vintage Walt Disney World goes.  But among the wonderful things you do see and hear are Doug Henning!  A very young Bobby Brown!  Upsettingly wrong-sounding Goofy!  The star of the brand new Disney movie "Baby"!?!

Stick around after the parade for a couple local news shows and a pledge drive!  Ah, YouTube.

The coming spring season is a time for animals to get flashy, so here is an extremely speculative Triceratops couple: 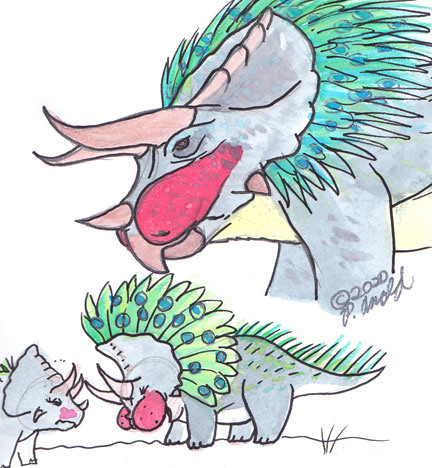 I have, if I do say so myself, an impressive collection of art books.  One of my favorite things I used to do was take one, pour over it, and draw from the illustrations in my own Sketchbooks.  My version of a Master Study, a very important learning method for any artist.  Any time I copy from a professional, the results always eventually end up more "me" anyway, but I still learn a lot from mimicking my favorites.

I've never really thought to share such studies but A. I got a copy of the gorgeous concept art book The World of the Dark Crystal, which I never thought I'd get to own.  It's been reissued to celebrate "The Dark Crystal Age of Resistance" series which, goodness, is a genuine miracle.  Like, go watch it right now instead of reading this.  Anyway, the book is a fantastic collection of Brian Froud's concept art for the film and loads of world-building notes.

And B. it is Goblin Week, my dudes!  And so, here are some Brian Froud-y gobliny "Dark Crystal" critters.  Drawing these little guys was so much fun and it makes me want to draw more studies like these (eyes the "Labyrinth" concept art book on the shelf).

You'll notice a note on the first page.  The Sketchbook I'm currently using is a Design Ideation LS PAINT.  And it is... fine.  It just doesn't take watercolor paint very well at all and the pages are thin enough to bleed through.  It was very nice for these pencil drawings though.  Note the pages are actually a creamy white paper; the rusty background on these images seemed to suit these little goblins better. 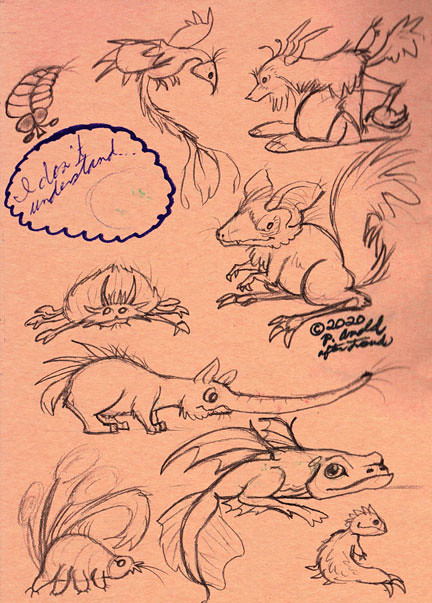 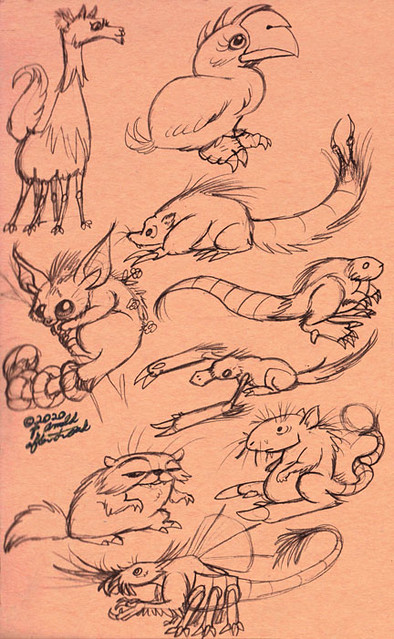 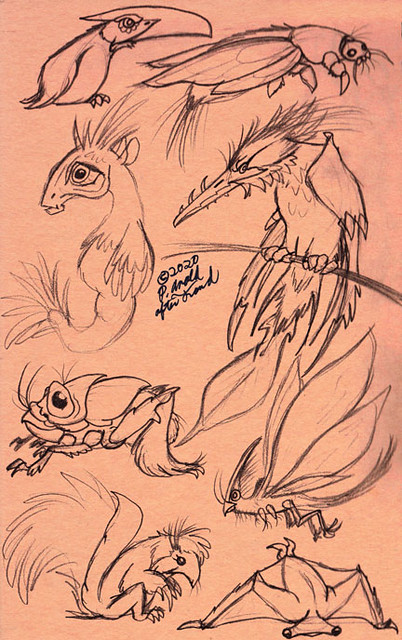 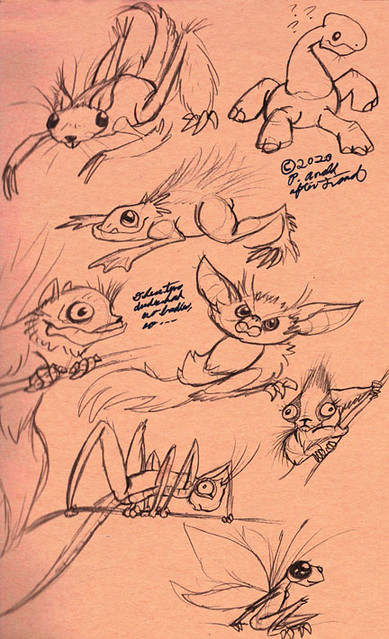 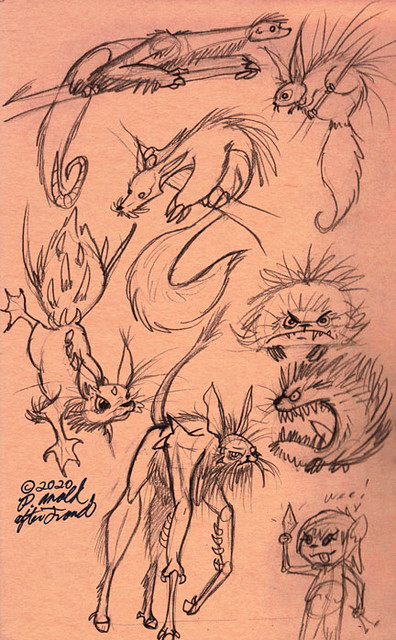 And now for some bonus sillyness: 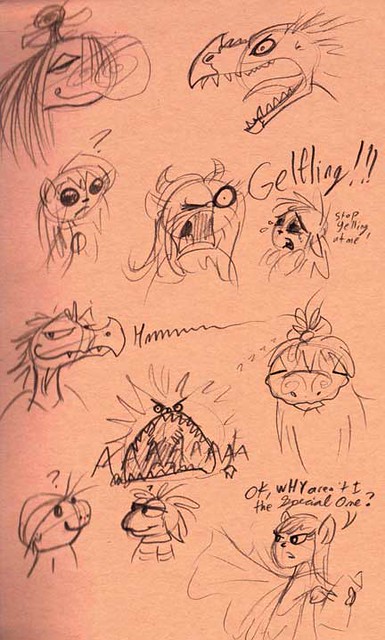 The Triumphant Return of Walter Fozbek!

Few things make me happier than getting to finally tie up a long-dangling loose end.

You may recall that way WAY back in the summer of 2011, I wrote two long, weird posts about The Double Disappearance of Walter Fozbek by Steve Senn, a short, weird book that I mostly remembered for it's very short, very weird animated adaptation that aired as part of the anthology series "CBS Storybreak".  I strongly recommend reading those posts because there's a lot of information in them.  Like I said, this is a very weird book.  (You'll also get to enjoy some early-installment weirdness.  Who the hell is this person who actually enjoyed the taste of an IPA?  Certainly not I?)

As happy as I was to finally find the book, I still longed to watch the cartoon again.  I figured by now that it was lost to the ages, Lost Media if you will.  But it turns out that there's a small but dedicated contingent of YouTubers finding and uploading as many "CBS Storybreak" episodes as they can find.

And, miraculously, "The Double Disappearance of Walter Fozbek" is among them!  What a great way to kick off the new decade!  Here it is:

I remember practically every minute of this strange little cartoon. It's really close to the book, aside from a somewhat streamlined ending, "Flintstones"-ish prehistoric gags and all.  There's also a touch more existential angst.  Like, certainly "The Last Unicorn" this ain't.  But that scene where Walter (remember he's the only human in a world of anthropomorphic animals) is face-to-face with the fossil remains of another human (remember humans are extinct in this world); that kind of thing messes you up as a kid.

Between the New Kids on the Block Christmas Special and "Walter Fozbek", this has been a very good time for “Yay I KNEW it was real!  And, now that I can finally watch it after 20-30 years, I completely understand why everyone looked so confused and slightly concerned when I tried to describe it to them.”

Art! A cute pudgy Unicorn and her tiny Fairy friends to bless our 2020's. 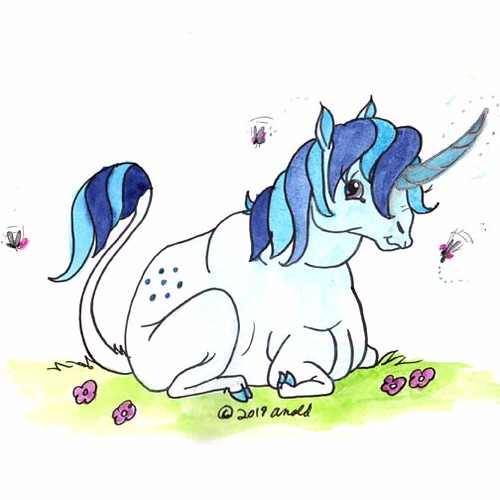